Ghana by the Sea 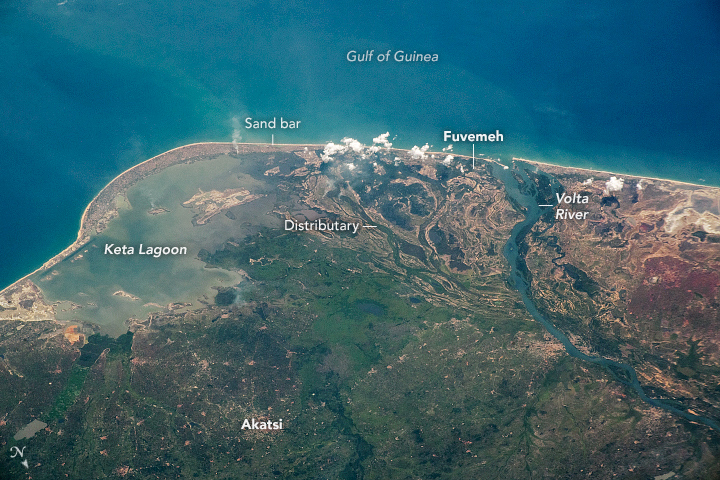 From low-Earth orbit, an astronaut looked south from the International Space Station (ISS) and shot this photograph of coastal Ghana. The image shows the Volta River Delta, with a smooth sandbar closing off Keta Lagoon from the Gulf of Guinea. Distributary channels of the delta show that the Volta River used to flow into the lagoon.

Keta Lagoon is one of approximately 90 lagoons along Ghana’s coast, and it supports subsistence and commercial fisheries for local communities. The country’s tropical climate also supports mangrove forests.

Vast river systems—including the Volta—flow down from highlands in Burkina Faso, south across Ghana, and into the Gulf of Guinea. These rivers support the farms that sustain the country’s economy, producing crops such as yams, grains, cocoa, and oil palms.

As climate change contributes to sea level rise, coastal flooding and erosion pose an imminent threat to Ghana’s coastal communities. Along a narrow strip of land between the lagoon and the gulf, the fishing village of Fuvemeh has been essentially swallowed by the sea, displacing its inhabitants. The shoreline here has been eroding at rates up to 2 meters per year, a dangerously rapid rate for coastal communities.

Astronaut photograph ISS064-E-15818 was acquired on December 26, 2020, with a Nikon D5 digital camera using a focal length of 340 millimeters. It is provided by the ISS Crew Earth Observations Facility and the Earth Science and Remote Sensing Unit, Johnson Space Center. The image was taken by a member of the Expedition 64 crew. The image has been cropped and enhanced to improve contrast, and lens artifacts have been removed. The International Space Station Program supports the laboratory as part of the ISS National Lab to help astronauts take pictures of Earth that will be of the greatest value to scientists and the public, and to make those images freely available on the Internet. Additional images taken by astronauts and cosmonauts can be viewed at the NASA/JSC Gateway to Astronaut Photography of Earth. Caption by Amber Turner, Jacobs, JETS Contract at NASA-JSC.