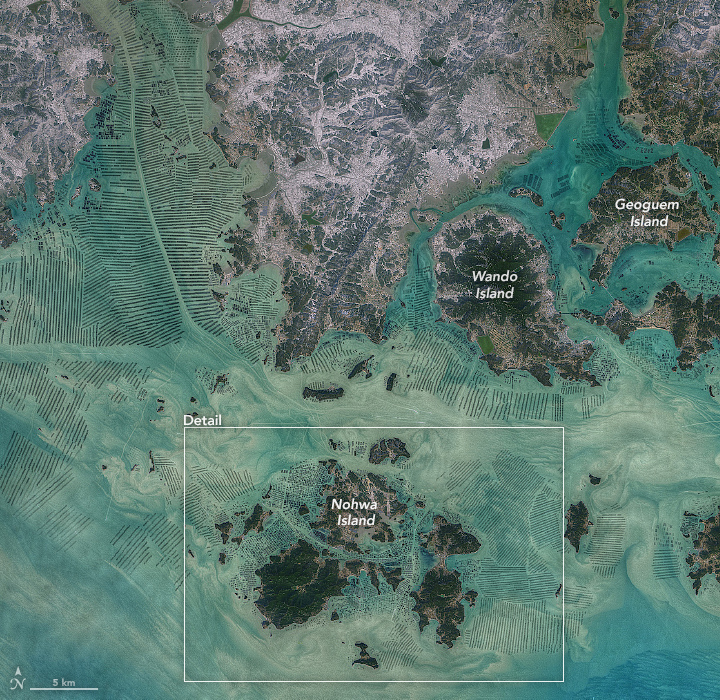 As international demand for seaweed rises, images like this one showing part of South Korea have become common. According to one estimate, the country now produces up to 1.7 million tons of seaweed each year.

When the Operational Land Imager (OLI) on Landsat 8 acquired this image on February 19, 2021, seaweed cultivation had left an obvious mark on many of the bays, inlets, and straits separating Wando County’s many small islands. The colors in the image have been enhanced; the patterns are all real, but certain shades and tones in the data have been separated and filtered to make water features more visible. In some places, the lighter and darker tones reflect the depth of the water (darker is deeper); in other places close to the coast, there may be some suspended sediment from rivers. 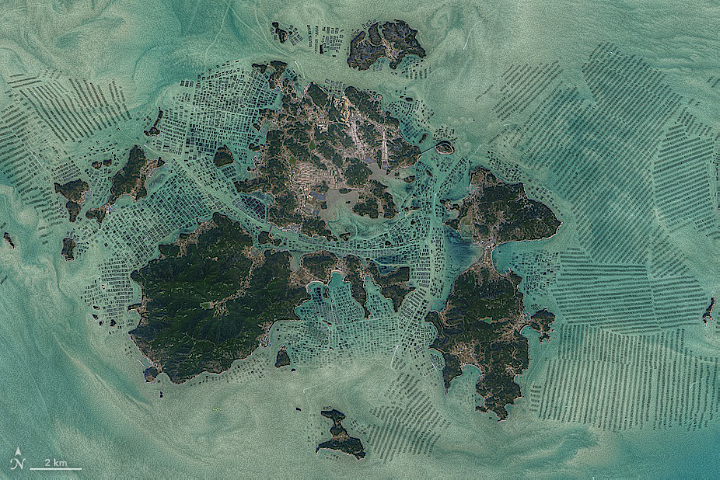 With its warm temperatures and modest tides, Wando County’s shallow waters offer an ideal environment for raising kelp, laver, and sea mustard. Seaweed is often grown on ropes that are kept floating near the surface with buoys. This technique ensures that the seaweed stays close enough to the surface to get enough light during high tide but does not scrape against the bottom during low tide.

Seaweed has long been prized in South Korea. Traditionally, new mothers eat seaweed soup daily for a month after giving birth to aid recovery. The dish is also a common birthday food. South Korea is the world’s top exporter of Pyropia, a type of red seaweed often used to make nori for sushi.

About 90 percent of all the seaweed that humans consume globally is farmed. That may be beneficial for the environment. In comparison to other types of food production, seaweed farming has a light environmental footprint because it does not require fresh water or fertilizer. It also removes carbon from the atmosphere.