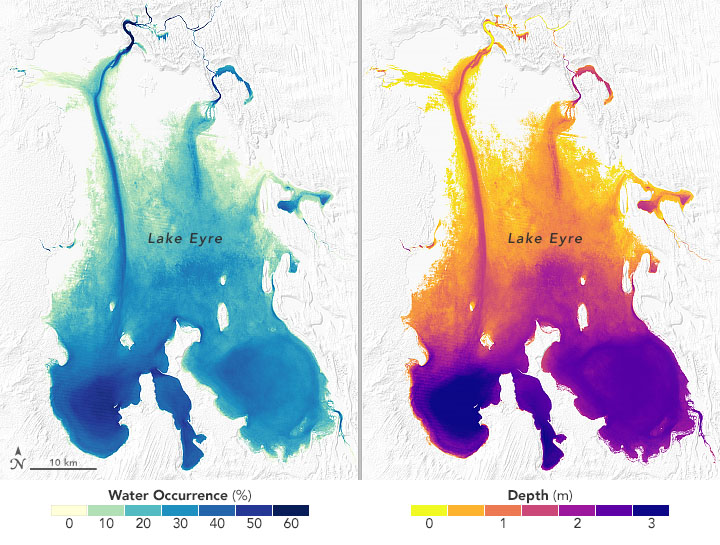 Lakes rarely have uniform depth. They contain dips and bumps across their floors that affect the amount of water they can hold. Traditionally, mapping the bottom of a lake has been done by deploying instruments from boats and ships. But that method is most useful for lakes that are easy to access, important to navigation, or flooded often.

Now researchers have generated a new technique to measure the depth of some of the most isolated, shallow lakes. Ephemeral lakes usually only fill after heavy seasonal rains or when a passing tropical cyclone drenches the landscape. Scientists from Israel and Australia recently used NASA satellite data to map the shape and depth (bathymetry) of such lakes in deserts.

By knowing the shapes of lake beds in dry regions, researchers can better estimate the amount of water stored in such basins and then improve water management. They also can reconstruct past climates when the lakes may have been fuller.

“Desert lakes are used sometimes as water resources, and they are a home to a large diversity of species, relying on flood water to arrive,” said Moshe (Koko) Armon, a graduate student studying hydrology at the Hebrew University of Jerusalem. “To understand the amount of water in a lake when it is flooded, we need to know the shape of its floor in detail and with the best resolution.”

Armon and colleagues mapped the largest shallow desert lake in the world, Lake Eyre, which spans 9,300 square kilometers (3,600 square miles) in Australia. While Lake Eyre tends to receive some water each year, the full area is flooded just a few times per century, according to Tim Cohen, a study co-author from Wollongong University. Flood waters help bring abundant vegetation, as well as birds, fish, and amphibians, to these vast water holes.

“Desert lakes are filled rather quickly by floods, but they empty quite slowly mainly because of evaporation,” said Armon. “The regions holding water for the longest time are the deepest parts of the lake.”

The left image above shows how often—by percentage of the year—water was present in different parts of Lake Eyre from 1984 to 2015. The map was constructed using data from the Global Surface Water Explorer, which quantifies changes in global surface water over the past 32 years using Landsat images.

The right image above shows the depth of Lake Eyre as reconstructed by Armon and colleagues. They derived the map by combining the Landsat water occurrence data with land elevation data from NASA’s Ice, Cloud and land Elevation Satellite-2. ICESat-2 collects elevation measurements of Earth’s surface in narrow swaths over land. Although traditionally used to measure the height of ice sheets, the laser signals from ICESat-2 can penetrate a few meters of water to measure the shape and depths of lake beds and shallow seafloors. The satellite-derived bathymetry results were correlated with field measurements of the lake taken via boat, helicopter, and land surveyors between June 1974 and September 1976. 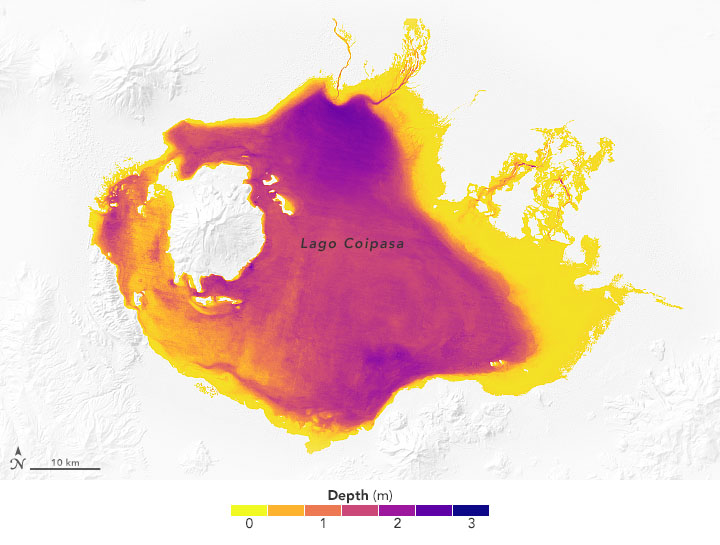 The map above shows the bathymetry of Bolivia’s Lago Coipasa during the wet season. Located in the Altiplano, Coipasa is an ephemeral saline lake with a maximum depth around 3.5 meters (11 feet). The lake is a popular tourist spot and adjacent to a large salt flat, where evaporation of mineral-rich waters leads to the formation of thick, flat salt deposits. The lake was previously unmapped.

Armon said a next step in this research would be to look at rainfall and flooding patterns around the lakes to better quantify the amount of water in the basins. “Water is the most-needed resource in the desert, so we need to know the connection to hydrologic and climatic patterns,” said Armon. “With these results, we can relate bathymetry with flooding patterns and determine what kind of rain will provide enough water in the desert.”

The bathymetry measurements could also help researchers better decipher the past hydrology of a region and its past climate, said Yehouda Enzel, Armon’s advisor at The Hebrew University of Jerusalem. For instance, higher lake levels in the past would likely indicate wet climatic periods, and lower levels would suggest long-term drying.