The recently issued Kunming Declaration from the High-Level Segment of the United Nations Biodiversity Conference lays the foundation for the post-2020 Global Biodiversity Framework (GBF) to be negotiated next year. Its stated goal is to reverse the extinction crisis and build an “ecological civilization,” and it includes an important reference to a new proposed area-based target:

A coalition of governments and NGOs, the High Ambition Coalition for Nature and People, called for this new target, which is known as “30×30” by insiders. The target was endorsed by the G7 in May 2021, and the coalition now numbers 68 countries. Even the United States, which is not a party to the convention, has signaled under Biden’s administration that it too will adopt a 30% target.

This is an important development. With a little over 16% of the world’s lands and inland waters under formal protection, we have lost more than two-thirds of all vertebrate life on the planet since 1970. This is not just a tragedy for nature, it is a tragedy for humanity. Biodiversity is what animates resilient, thriving ecosystems. And when ecosystems thrive, people thrive. Healthy ecosystems prevent outbreaks of novel viruses like COVID-19 (Everard et al. 2020). They recharge rivers and aquifers supplying water to irrigate farms, and they store vast quantities of carbon that otherwise would be released into the atmosphere.

It is clear we need to protect and conserve more land if we are to reverse the extinction crisis. Calling for a doubling of protected areas (PAs) by 2030 globally is certainly an important milestone on the path to building an ecological civilization, but it’s not enough. And there have been some misunderstandings around the global target and how it might pertain to national-level targets. It’s time for a science-based approach to national target setting under the GBF.

One of the key scientific references cited to support the 30×30 target is a set of peer-reviewed papers — the “Global Deal for Nature” (Dinerstein et al. 2019) and the “Global Safety Net” (Dinerstein et al. 2020) — which identify nationally relevant area-based land conservation targets to inform the Convention on Biological Diversity as well as national and subnational land use planning efforts. To date, the two papers have been cited in over 300 academic publications, and the Global Safety Net (GSN) was recently named a “World Changing Idea” by Fast Company. There are three key findings of the GSN:

1) Approximately 30% of the Earth’s land is identified as “of particular importance for biodiversity protection” (half of which is protected), but it makes clear that an additional 20% of lands need to be conserved in order to reverse the extinction crisis and stabilize our global climate system. This has become known as the ‘30+20’ formula. Other research has indicated that a 30×30 target would reduce the extinction rate by roughly half, which is not sufficient to achieve the long-term goal of the post-2020 GBF.

2) 30×30 is not a one-size-fits-all goal. Each country needs to contribute in different ways based on the unique mix of its natural habitats and genetic resources, resulting in different area-based targets. Some countries have enormous biological wealth — countries like Gabon, Colombia, and Papua New Guinea — and should have higher national targets. Other nations, particularly in the developed world, fall into the ‘sweet spot’ where a 30×30 target makes sense as an interim step. While other nations have largely converted lands for agricultural production and thus need lower targets to ensure that displacement of rural and subsistence communities does not occur. To account for these discrepancies, the GSN recommends a “common but differentiated” approach wherein each country sets a national target based on the available inventory of natural lands within its boundaries, with all countries striving collectively to protect and conserve a full 50% of the terrestrial surface:

3) At least 37% of the footprint of the GSN is Indigenous land. It will simply not be possible to achieve the objectives of the post-2020 GBF without the full participation and leadership of Indigenous peoples. Indigenous land tenure rights must be secured and tribal governments adequately resourced if the Convention on Biological Diversity is to be successful. Many indigenous groups have been actively lobbying for the larger 50% global target, which would expand opportunities for Indigenous communities around the world to participate in the GBF. In the case of the Amazonia region, they have called for an 80% conservation target. Recommendations for both the 50% Global target (Motion 101) and the 80% Amazonia target (Motion 129) were passed at the recent International Union for the Conservation of Nature (IUCN) congress — the world’s largest gathering of conservation scientists.

What does “protection” mean?

This is a huge question. Often when people hear the word “protected area” they think of a fenced-off nature reserve which excludes any human activity. But times have changed. There is a large array of land management options that can count towards area-based targets under the GBF. To help sort it all out, IUCN developed a new matrix of management categories for protected areas by governance type — government (public), public-private, private, and Indigenous/local community — totaling an array of 77 different protected area approaches. To that we need to add an additional management category that is not part of the IUCN lexicon but will play an extremely important role in the post-2020 framework– OECMs: 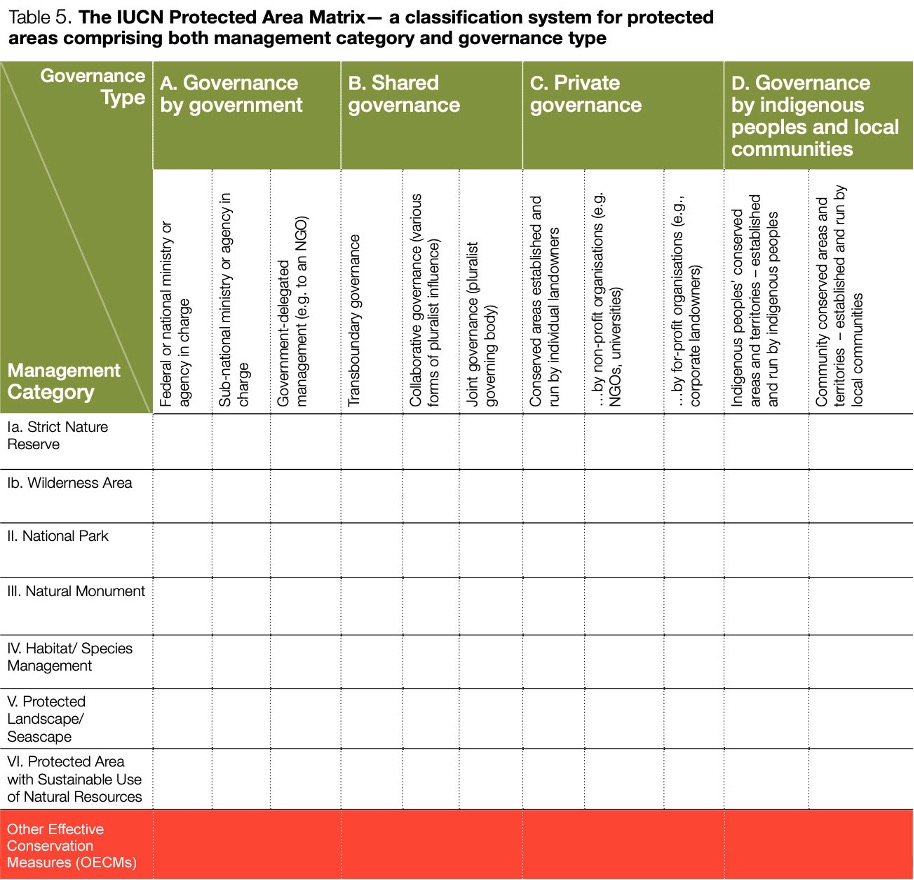 Other Effective Conservation Measures (OECMs) are in some ways the inverse of IUCN’s VI management category. VI areas are formally protected but allow for sustainable use of natural resources, such as the cultivation of natural botanical products — activities that do no harm to biodiversity within the given ecosystem. OECM’s are working landscapes that are productive, but have a stated goal to support biodiversity, for example pastoral landscapes, no-go tree stands within a managed forest, or agroforestry initiatives.

From an equity perspective, this diversity of approaches is essential to help “…ensure that international conservation targets are legitimate to the many and diverse actors required to turn the tide on biodiversity loss” (Gurney et al. 2021). Recently, African scientists published a “Shared Earth” concept to inform the post-2020 GBF linking biodiversity and people together across a spectrum of landscape types, calling for an elevation of the role of OECMs to conserve nature in the developing world (Obura et al. 2021).

A more nuanced approach to the protection of biodiversity — encompassing both preservation (PAs) and conservation (OECMs) — is vitally important as the world’s governments commit to reversing the extinction crisis within the decade. We need an “all of the above” approach, one that moves beyond a simplistic binary rhetoric that pits PAs against OECMs. Many working landscapes, particularly Indigenous territories, contribute enormously to both biodiversity and carbon storage, and they need to be recognized in area-based targets under the GBF and supported accordingly, ensuring the land tenure rights of these communities. Conversely, some ecosystems are so fragile that more formal preservation approaches are needed, but that doesn’t mean adjoining local communities cannot benefit from these areas and be provided with sustainable livelihoods.

All of this is important background as we dive into the findings of the Global Safety Net (GSN), which offers an index of recommended area-based targets by country based on an inventory of available natural lands within the boundaries of each nation. Croplands and populated areas (including small towns) are excluded in the GSN. That is not to say they wouldn’t have some biological value or that all lands (including cities) shouldn’t be sustainably managed. We need to sustainably manage 100% of the Earth, but we also need to be very specific about the 50% of terrestrial habitat that remains and requires formal protection in order to save the world’s remaining biodiversity. Each country has a unique inventory of these natural lands, and it is up to each country to determine the governance structure best suited to maximize the preservation and/or conservation of these lands.

With that long preamble, let’s dive into the numbers. In the table below we sort all countries greater than 2000 km2 in size into one of three buckets — High Conversion, Mid-Range (30×30), or High Biodiversity — based on an inventory of available natural lands including existing Protected Areas. ‘B’ represents land area designated as particularly important for biodiversity.

C’ represents additional land area that hasn’t been designated as particularly important for biodiversity but is extremely valuable for carbon storage: 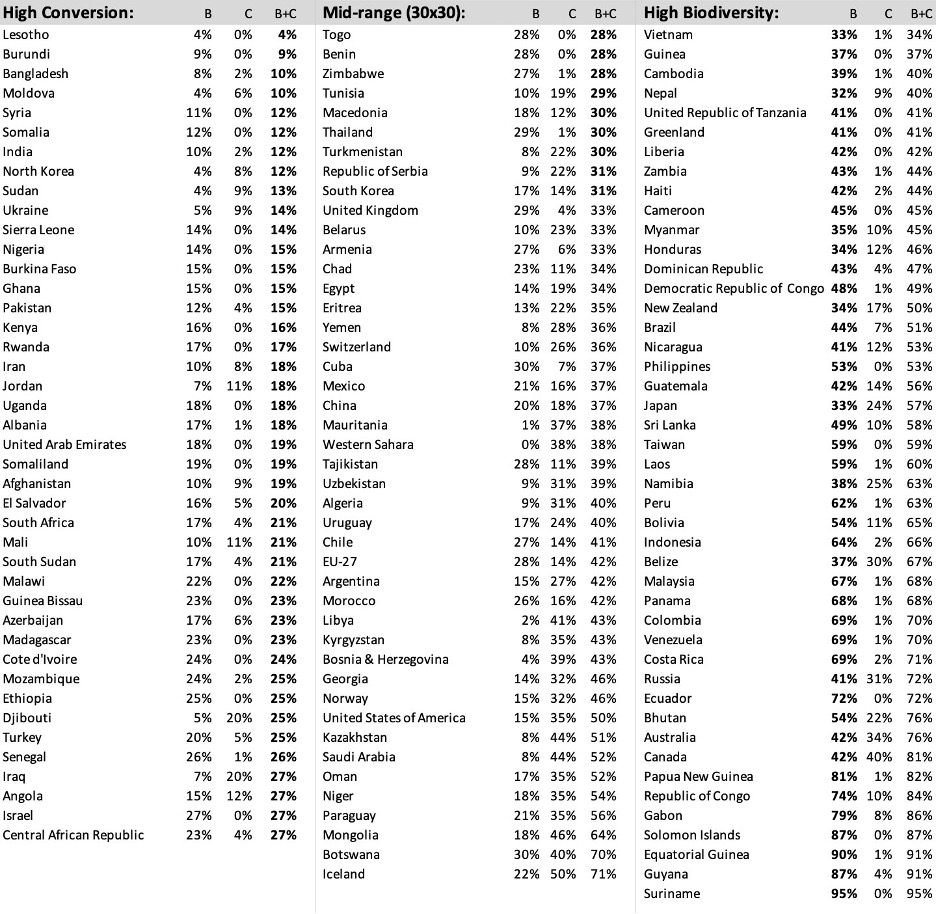 In the analysis, there are 44 “Mid-range” (30×30 countries). These are countries with 30% (or less) land area identified as particularly important for biodiversity (column B). In most cases these countries have supplemental land areas identified as particularly important for carbon storage (column C). The US, UK and EU all fall into this category, as well countries like Argentina, which has 15% of its land listed in column B and additional lands in column C. For these countries the 30% target for a 2030 horizon makes sense as an interim step, however efforts should be made to preserve and/or conserve all remaining wildlands (column B+C).

There are 42 “High Conversion” countries. These are countries that have less than 28% of land in a condition suitable for preservation or conservation. While some restoration is possible in these countries, a 30% target could put local communities at risk who depend upon the land for their sustenance. For these countries the recommended target is indicated in column B+C. In many cases these lands are already under formal protection and require additional resources to enhance biodiversity outcomes.

There are 45 “High Biodiversity” countries. These are countries that have more than 32% of land area identified as particularly important for biodiversity, including Species Rarity sites, High Biodiversity areas, and Large Mammal landscapes. For these countries the target for a 2030 horizon is indicated in column B, however efforts should be made to preserve and/or conserve all remaining wildlands (column B+C). Stand-out examples include Colombia and Costa Rica, both of which have 69% of land area identified as critical for biodiversity. Some countries like Suriname and Guyana have an enormous quantity of biologically important land, and these countries should be handsomely compensated for the ecosystem services they provide to the entire world. This is a hot topic and many economists, scientists, and financial institutions are proposing schemes like Payment for Ecosystem Services (PES) to provide ongoing revenue to public and private landowners of designated conservation areas.

To conclude, the Global Safety Net lays out a “common but differentiated” approach to setting area-based targets under the post-2020 Global Biodiversity Framework. It finds that roughly one-third of the world’s countries fall into the 30×30 sweet spot, though most of these countries contain additional lands that should be conserved for carbon storage. Another third of the world’s countries lack insufficient land area to warrant a 30% target, and the remaining third of countries should have much higher targets. 37% of all land identified in the GSN overlaps with Indigenous territories, so it’s clear that securing Indigenous land tenure rights and adequately resourcing tribal governments is key to the success of the Convention on Biological Diversity.

Note: Karl Burkart is a co-author on the paper “A ‘Global Safety Net’ to reverse biodiversity loss and stabilize Earth’s climate.” and is employed at One Earth, the nonprofit organization which provided funding for the paper.