A Dusty Day in Patagonia 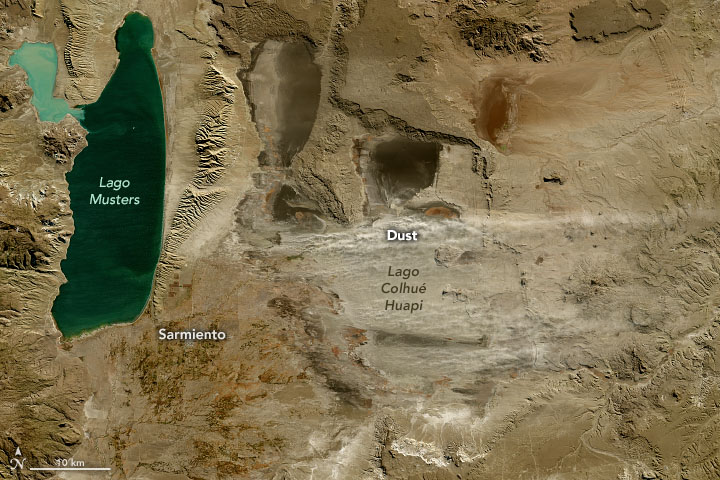 Strong northwesterly winds routinely blow down the eastern side of the Andes Mountains and whip across the central Patagonia Desert. In the process, they lift abundant dust from Argentina’s Lake Colhué Huapi, making it the largest and most active source of dust storms in the region.

The Operational Land Imager (OLI) on Landsat 8 acquired this natural-color image of dust streaming from the silty lakebed on May 24, 2021. Colhué Huapi is a particularly abundant source of dust because the shallow lake regularly grows and shrinks in sync with variations in the flow of the Senguer River and the pace of evaporation. When lake water levels are low, as they were when Landsat 8 captured this image, fine-grained, light particles are easily transported by the wind.

While dust storms are common here, scientists are only beginning to track them rigorously and research the role they play in the regional environment. Colhué Huapi dust likely affects the region in several ways, explained NASA remote sensing scientist Santiago Gassó. Field research and ice cores suggest that winds may transport Colhué Huapi dust as far as East Antarctica, where it could have consequences for how quickly snow and ice melts. The dust storms also may be a significant fertilizer for the South Atlantic Ocean, providing key minerals that may trigger blooms of phytoplankton.

To better understand the role of Colhué Huapi dust storms, Gassó recently analyzed satellite and surface weather data from the past five decades, assessing the year-to-year variability in dust storms and identifying periods of high activity. Dust storms peak during the summer (December through March), though wintertime events (May through August) are also common, Gassó found. Most years brought 15 to 30 moderate to large events. There has also been steady increase in the number of dusty days observed since the 1970s, according to his analysis.

“Events like these are a reminder that dust activity is not just a warm weather phenomenon,” said Gassó. “It can happen in cold places, too. You just need loose soil, limited moisture, and winds.”