A Swampy Home for Shoebills 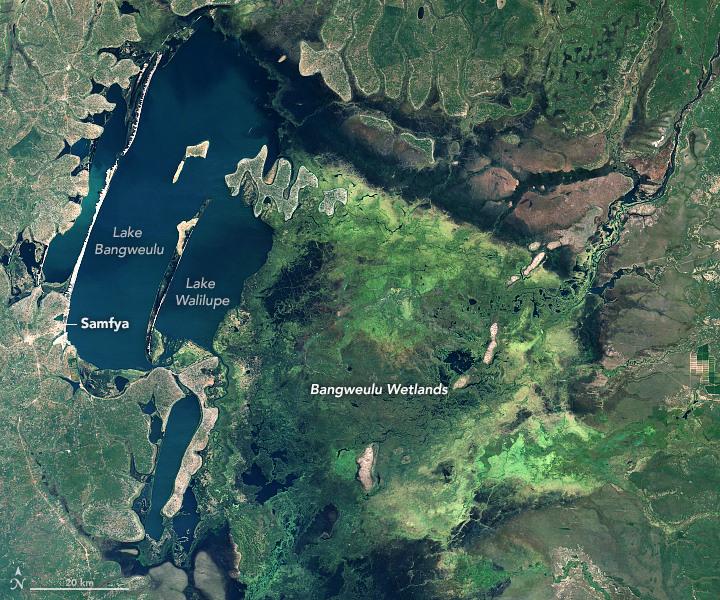 With oversized bills, gangly legs, and shaggy neck feathers, there is something vaguely cartoonish about the African shoebill (Balaeniceps rex). For prey, however, there is little that is funny about these birds.

The dinosaur-like shoebill is a wading bird that can stand motionless for hours before using its wide bill and explosive bursts to snap up lungfish, bichir, tilapia, eels, monitor lizards, and even baby crocodiles. The enormous birds—some standing up to 1.5 meters (5 feet) tall, with 2.5-meter wingspans—prefer to live near slow flowing and muddy freshwater full of vegetation. If decaying vegetation accumulates quickly on the bottom or temperatures change in unfavorable ways, water can quickly become depleted in oxygen. This forces prey to the surface to breathe, giving shoebills an opportunity to strike.

On May 15, 2020, the Operational Land Imager (OLI) on Landsat 8 captured this natural-color image of one such ecosystem in northern Zambia. The Bangweulu wetlands—which include a shallow lake, several rivers, and flooded grasslands and swamps—spread across a flat area about the size of Connecticut.

Looking down from space, a group of mostly parallel sandy ridges form a series of islands within the lake. Several towns are located along the shores of the lake, and swamps are located immediately to the south and east. Beyond these are expansive floodplains that fill with water seasonally. It’s these mirror-like floodplains, where distinguishing between sky and water can be difficult, that give the place its name. In the local Bemba language, bangweulu means “where the water sky meets the sky.”

The Bangweulu wetlands have been designated as a wetland of international importance by the Ramsar Convention and as an Important Bird and Biodiversity Area (IBA) by BirdLife International. About 400 bird species and 80 species of fish live in the wetlands, including dozens that are threatened or endangered. In addition to the fish and the birds, the area is frequented by elephants, lechwe, hippopotamuses, and several other types of wildlife.

Shoebills are listed as vulnerable on the International Union for Conservation of Nature’s red list of threatened species. The birds face pressures from development, poaching, and fires. Shoebill numbers are declining, and global populations of the birds are thought to range from 5,000 to 8,000, with the largest populations in the Sudd wetlands of South Sudan.