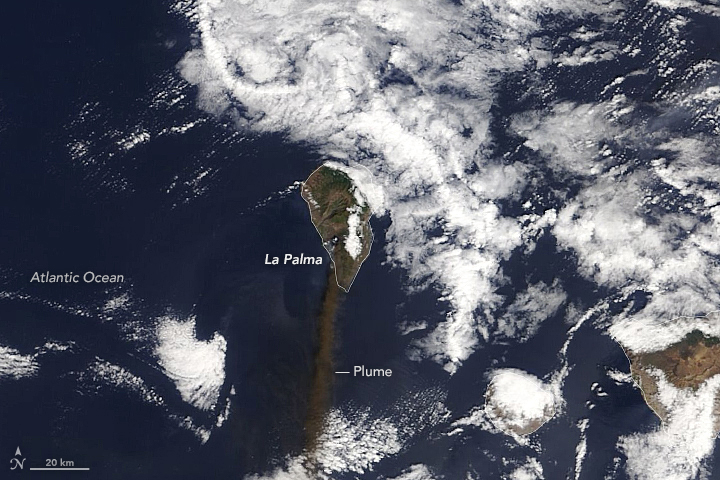 Since the Cumbre Vieja volcano began erupting on September 19, 2021, most of the compelling activity has happened on the ground. For nearly two weeks, thick sheets of lava burned through farmland, roads, and homes on the southwestern part of La Palma, one of the Canary Islands.

The atmospheric effects of the eruption had been less dramatic until the Canary Islands Volcanology Institute (INVOLCAN) reported an increase in explosive activity that started on October 2. In the midst of the elevated activity, the Moderate Resolution Imaging Spectroradiometer (MODIS) on NASA’s Terra satellite captured an image (above) of a dense plume of ash streaming south on October 4, 2021. According to the Toulouse Volcanic Ash Advisory Center, the plume reached 3 kilometers (2 miles) on October 4, posing a hazard to aircraft in the area. Despite the increase in activity, volcanologists still rank Cumbre Vieja’s explosivity as “moderate”—a 2 out of 8 on the Volcanic Explosivity Index.

The eruption has not been energetic enough to inject large amounts of ash and gases into the stratosphere, where they can have strong and lasting effects on weather and climate. However, it has been strong enough to produce a rising column of emissions that helped form the remarkable pattern in the clouds shown in the image below. The MODIS on NASA’s Aqua satellite acquired the image on October 1, 2021. 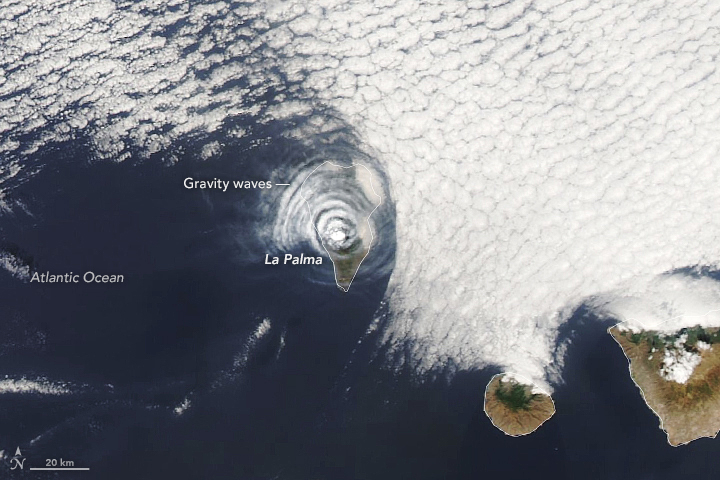 The bullseye-shaped cloud was the product of a rising column of superheated ash and gases known as the eruption column. The buoyant column of water vapor and other gases rose rapidly upward until colliding with a drier, warmer layer of air at roughly 5.3 kilometers (3.3 miles) altitude, according to INVOLCAN. The unusually warm air above—a temperature inversion—functioned like a lid, preventing the volcanic plume from rising any higher. Instead, it flattened out and spread horizontally.

Since volcanic eruptions typically have natural ebbs and flows in their intensity, pulses in the upward flow of the volcanic column created concentric gravity waves as they hit the temperature inversion and spread outward. The process is similar to the way a stone dropped in a pond creates ripples that spread outward.