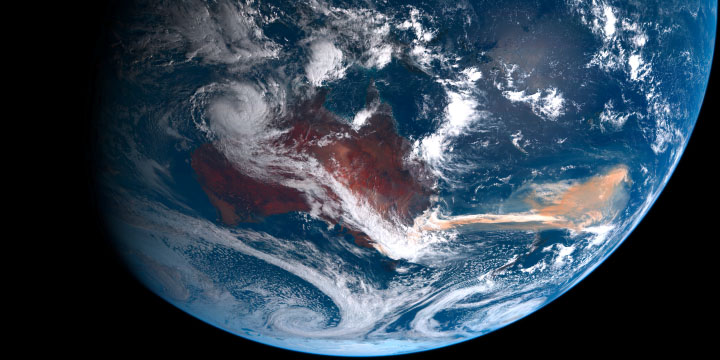 The catastrophic wildfires that scorched eucalyptus forests in southern and eastern Australia in the summer of 2019-2020 were unprecedented in their scale and intensity. Started in October 2019 and burning through January 2020, they scorched millions of hectares and killed or displaced an estimated 3 billion animals. The fires emitted vast amounts of carbon dioxide and lofted smoke plumes to record heights.

That smoky summer also affected marine ecosystems thousands of kilometers away, according to new research that combined satellite data and surface measurements. From December 2019 to March 2020, the deposition of aerosols emitted by the fires triggered phytoplankton blooms in the normally iron-limited waters of the South Pacific and Southern Ocean. Together the surface area of those blooms exceeded the size of Australia.

The image above, acquired on January 6, 2020, by the Japanese satellite Himawari-8, shows the plume of smoke and ash streaming away from the fires on the southeastern coast of Australia. As global climate warms, such fires are expected to increase in frequency and intensity, releasing more carbon dioxide, which further fuels climate change.

It is important to understand the effects of such fires, not just on local ecosystems but on distant ones as well, noted marine biogeochemist Weiyi Tang of Princeton and biogeochemist Nicolas Cassar of Duke University, lead authors of the study. “The fact that both the fires and the blooms were unprecedented in the satellite record initially gave us an inkling that they might be connected,” Cassar said.

To quantify the aerosols emitted by the fires, the team examined aerosol optical depth (AOD) data from the Copernicus Atmosphere Monitoring Service (CAMS), which is based partly on measurements from the Moderate Resolution Imaging Spectroradiometer (MODIS) on NASA’s Terra and Aqua satellites. In the visible spectrum, AOD provides a measure of the amount of desert dust, sea salt, sulfate, organic matter, and black carbon in a column of air. The researchers looked specifically at black carbon AOD as a proxy for wildfire aerosols. Tang, Cassar, and colleagues found that black carbon emissions emanated mainly from wildfires in southern and eastern Australia and blew out to the broad South Pacific within a few days. 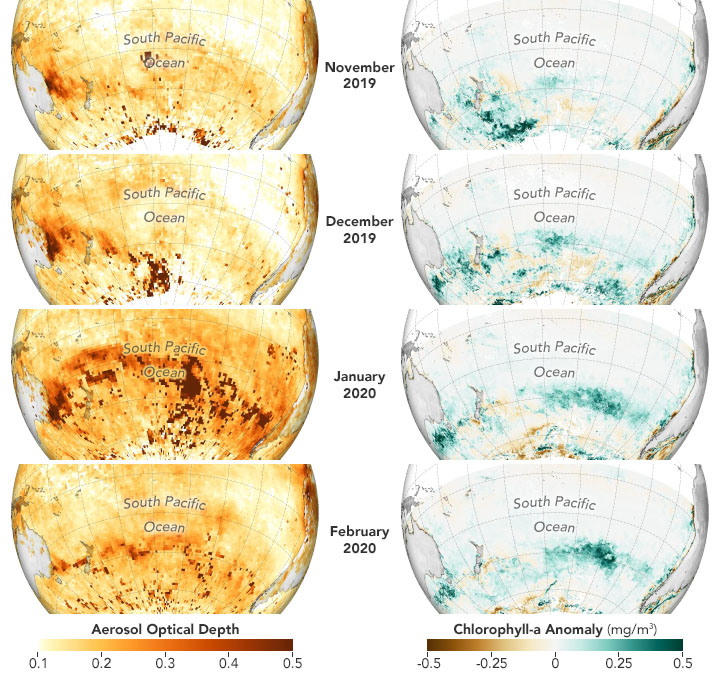 The maps above show the monthly aerosol levels (left) and chlorophyll anomalies (right) from November 2019 to February 2020. The researchers identified two regions south and east of Australia where chlorophyll concentrations were double the normal seasonal levels—values never before observed in the 22-year satellite record. Those chlorophyll anomalies occurred within a few days to weeks after the peaks in black carbon aerosols. In those two regions, black carbon aerosol values were also 300 percent higher than normal, a level unprecedented in the 17-year aerosol record.

As the wildfire plumes streamed off the Australian continent, they passed over an air sampling station on the summit of Mount Wellington in Tasmania. Analyses of airborne aerosol samples collected there revealed the presence of iron and a saccharide molecule called levoglucosan that forms when cellulose burns—direct evidence that the aerosols came from the wildfires. Downwind, Argo floats in the ocean also detected elevated levels of chlorophyll in the bloom areas, affirming that the satellite chlorophyll signal was real.

The connection between the smoke aerosols and the bloom was also corroborated by a model that computed the trajectories of the air parcels leaving the fire. “The aerosol optical depth and the modeled air mass trajectories confirmed that the algal blooms were in the path of the aerosols from the wildfires,” Cassar said.

The team even considered whether natural variability in the ocean—such as the Indian Ocean Dipole, the Southern Annular Mode, or El Niño-Southern Oscillation—could explain the influx of nutrients fueling the bloom. “There was nothing that could explain the observations that we had,” Tang said. “It turns out that natural variability was relatively small compared to what we observed.” 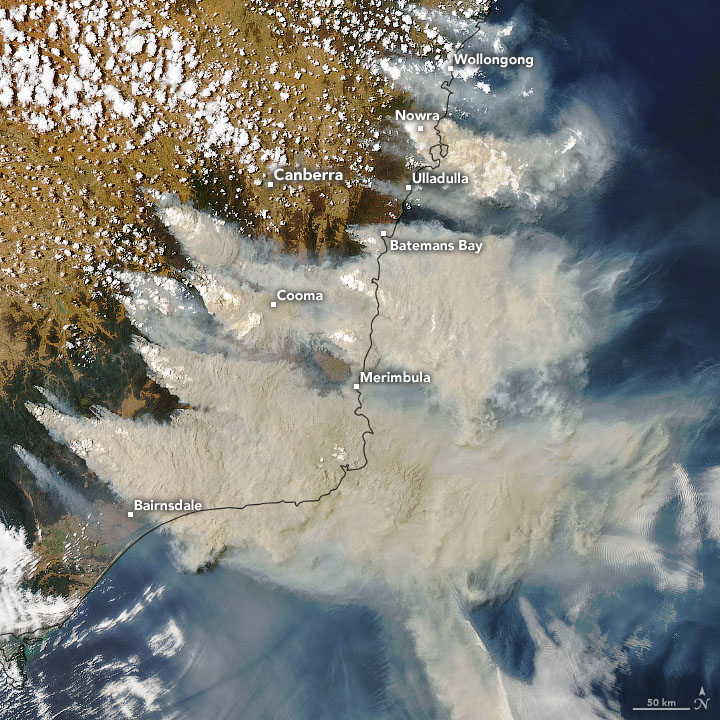 In a related paper, another research team reported that the 2019-2020 fires emitted more than twice the carbon dioxide previously estimated, a magnitude exceeding Australia’s annual carbon dioxide emissions from fires and fossil fuels. The phytoplankton bloom initially took up a great deal of that carbon dioxide, but its ultimate fate—for example, whether it was respired at the surface or exported to the deep ocean—is not yet known. “For us, the holy grail is to figure out how much this bloom offset the carbon emissions associated with the Australian wildfires,” Cassar said.

Elucidating the links among wildfires, atmospheric carbon dioxide, and marine ecosystems could help improve global carbon cycle models. “We focused on the Australian wildfires because they were really unique in size, but I think it’s worth also looking at other wildfires, including in California, and other regions of the world,” Cassar noted. “And if it is important, globally, then it needs to be better represented in Earth system models.”