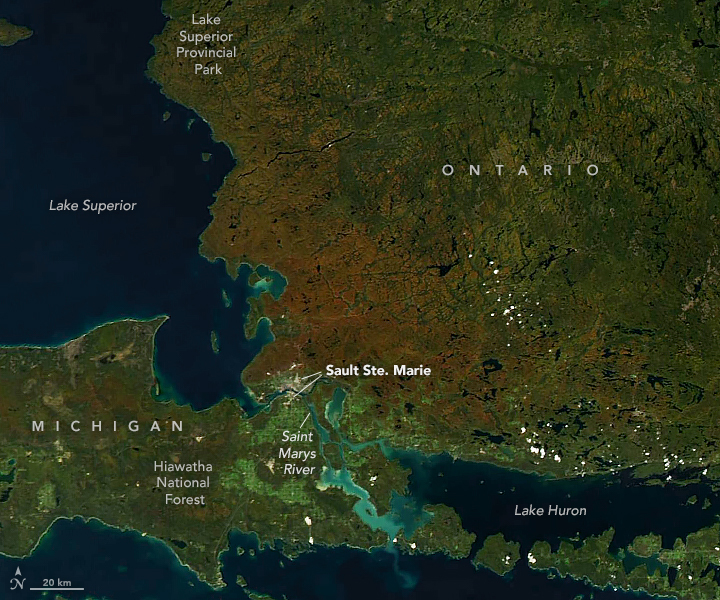 The region around Sault Ste. Marie is steeped in history. Native peoples have lived and fished here for at least 2,000 years. French missionaries and fur traders arrived in the 1600s, and soon after the city of Sault Ste. Marie was established—the first city in North America’s Great Lakes region. After the War of 1812, the city was split into two—one part in the U.S. state of Michigan and the other in the Canadian province of Ontario.

Through all this time, one thing has probably remained unchanged: the beauty of autumn in this area. The Moderate Resolution Imaging Spectroradiometer (MODIS) on NASA’s Aqua satellite acquired this natural-color image on September 29, 2021, as seasonal color around Sault Ste. Marie neared its peak.

Sault Ste. Marie is routinely included on lists of the best places to view the changing foliage. So far, autumn 2021 is supporting that claim. According to news reports, the summer weather in the area was warmer and wetter than usual, but not overly so. The favorable conditions led to healthy, unstressed trees capable of displaying vibrant color.

Fall color reaches its peak when air temperatures drop and shortened daylight triggers plants to slow and stop the production of chlorophyll—the molecule that plants use to synthesize food. When the green chlorophyll pigment fades, various yellow and red pigments become visible.

For a closer look at the foliage, leaf peepers in Sault Ste. Marie, Ontario, could find color around the city, on a scenic drive north along the shore of Lake Superior, or via train through the Agawa Canyon. An Ontario Parks website provides updates on the status of leaves across this area; many trees were already peaking in the first week of October.

Leaf peepers in Sault Ste. Marie, Michigan, had to wait a bit longer. Peak color tends to reach Michigan’s eastern Upper Peninsula as late as the second week of October. The trails and overlooks in Hiawatha National Forest offer plenty of access to view the arboreal display.

The color, however, can leave faster than it arrived. Experts warn that once color has peaked the leaves can quickly turn brown and blow away with a decent gust of wind. But if history is any indication, the symphony of colors should return next year.