Between land and sea: Agrobiodiversity holds key to health for Melanesian tribes

Nestled between steep mountains and a sandy shoreline that slopes into the Solomon Sea, the village of Baniata is testimony to resilience and self-sufficiency. Located on the remote southern shore of Rendova Island in the Solomon Islands’ Western province, people have lived in Baniata through cyclones and tsunamis in extreme isolation for more than two centuries. Today, eight Melanesian tribes live together in the village in a unique blend of culture and traditions that revolve around nurturing and gathering a rich diversity of foods.

Surrounded by tropical seas, it might seem fit that the Baniata community source most of their food from the oceans. However, an ancient system of forests and home gardens thrives further inland, leveraging the region’s tremendous natural biodiversity.

Through careful planting and tending over generations, these Indigenous farming systems support a lush assemblage of nuts, fruits, tubers and medicinal plants, according to a U.N. report from the Food and Agriculture Organization (FAO). The new scientific report provides the most detailed and comprehensive account to date of the sustainable food systems of Indigenous peoples around the world.

Manoka Havea, a village elder, remembers watching his grandparents preparing their gardens using traditional practices when he was a child. Now a leader of the community himself, he preserves their traditional tools, cultivation methods and seeds.

However, despite its extreme isolation, Baniata is transitioning steadily toward a cash-based economy, and children are integrating into mainstream schooling. With inevitable changes on the horizon, Manoka Havea said he hopes that connections to the past can be upheld.

“Our traditional food system is healthy and helps our immune systems and energizes our people,” he told Mongabay in a phone interview. “We don’t want to let our children over the coming generations to forget about it, so we try to maintain it as best we can so that these cultures are not totally wiped out from our people.” 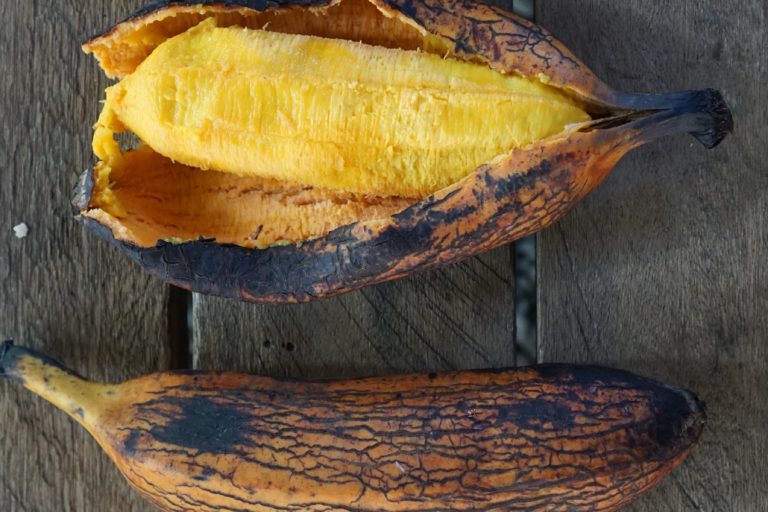 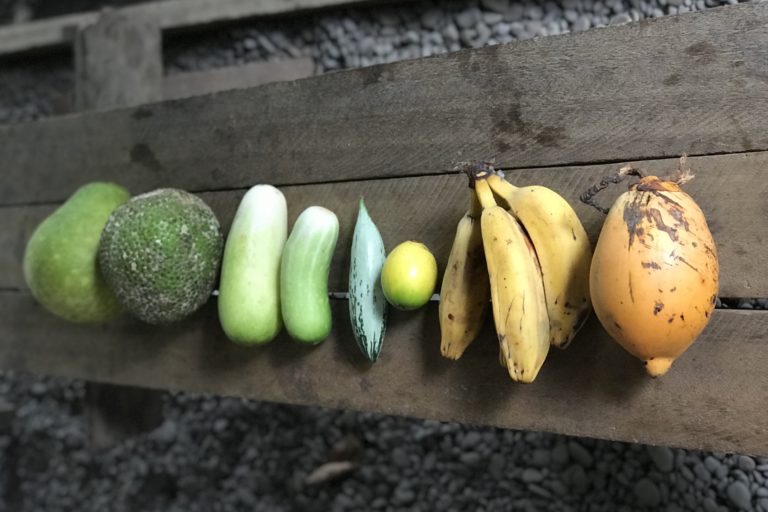 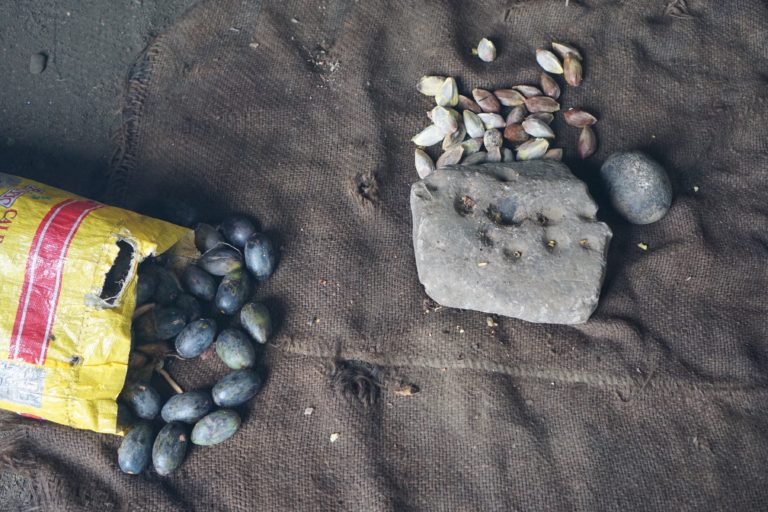 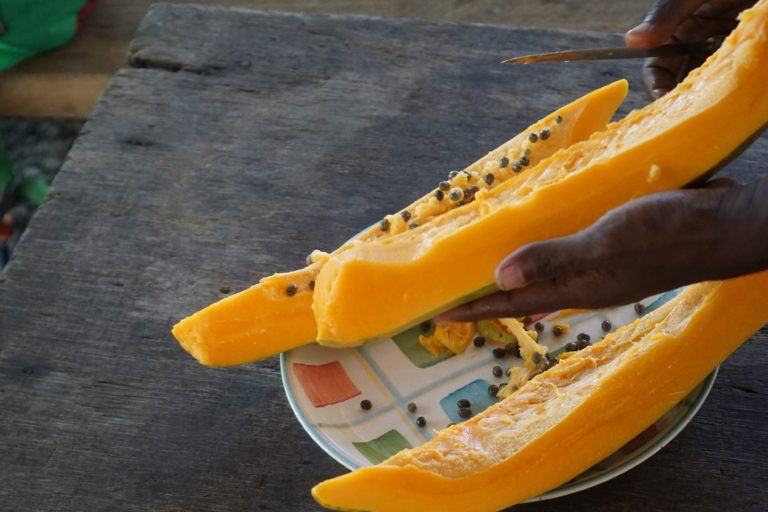 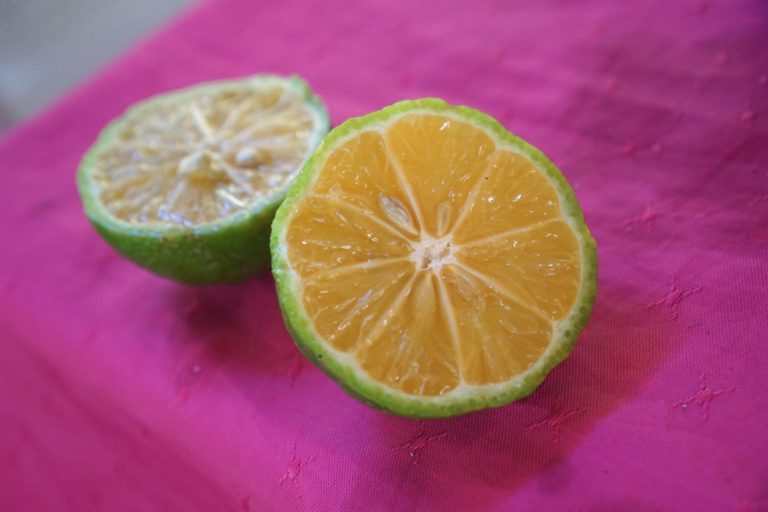 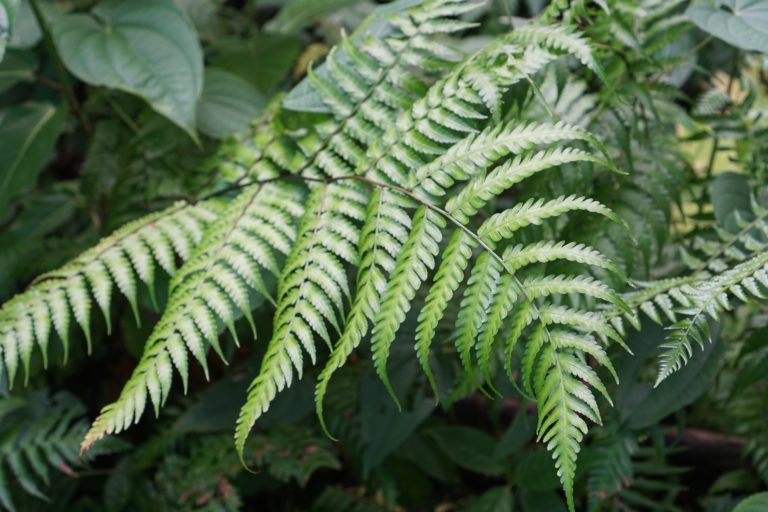 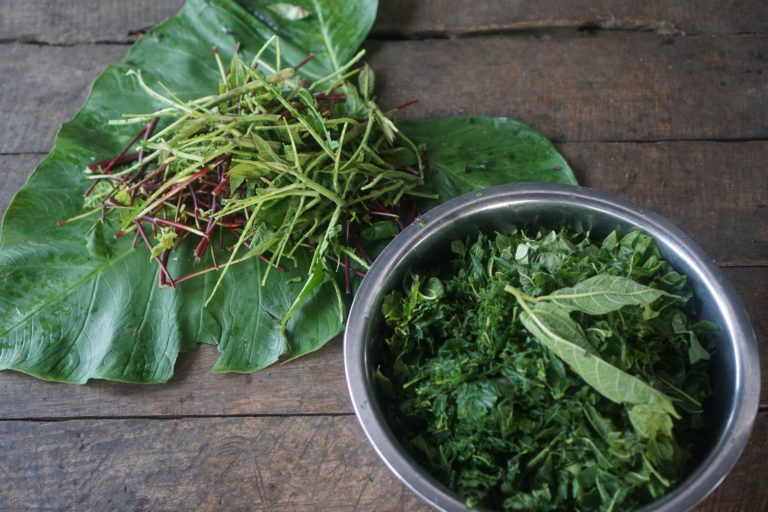 A resilient form of cultivation

“Solomon Islanders have long lived in tune with the natural cycles of the land, ocean and weather patterns,” Chris Vogliano, a technical adviser of food systems at USAID, told Mongabay. “Up until a century ago, Baniata was almost completely self-sufficient, with community members relying mostly on homegrown and wild foods such as yams, bananas, taro, wild boars, possums and seafood.”

Today, canarium nut trees (Canarium indicum) stand in leafy groves behind the village, where they form the basis of an ancient agroforestry system — a resilient form of cultivation that sustains not only human diets but also supports biodiversity, builds soil horizons, manages water tables, and sequesters carbon from the atmosphere. Agroforestry enables the Baniata community to maintain a largely self-sufficient lifestyle — more than 70% of their diet is from foods either grown locally or gathered from the wild.

In addition to their role as the basis of the community’s agroforestry system, ngali nuts are one of the main sources of cash income alongside copra made from dried coconut from plantations that line the shoreline, and local handicrafts. Villagers earn income from selling ngali nuts in both domestic markets and by trading with partners who help them to access international customers in countries like New Caledonia, Fiji and Australia.

Traditionally, harvests were supplemented with wild-caught animals from land and sea, but hunting and fishing are becoming less prominent following the introduction of imported, canned and preserved meat and fish to the village.

Baniata’s Indigenous Melanesian food system features some 132 species, an “excellent” diversity for dietary health, according to Vogliano, who co-authored the U.N. report.

“Diverse diets, particularly sourced from many different food groups, are a proxy for increased nutrition adequacy,” he said. “If we want sustainable and healthy food systems, agrobiodiversity — the biodiversity found within food systems — is essential.”

Traditional crops can also be more nutritious than modern varieties, according to Vogliano, who highlighted a specialty of Melanesia, the fe’i banana (Musa troglodytarum), which is bright orange in color and contains 100 times the vitamin A of a typical Cavendish banana (Musa acuminata). Other super foods in Baniata’s Indigenous food system include cassava, taro, sweet potatoes, leafy green vegetables and an array of tropical fruits.

Notwithstanding this extraordinary crop diversity and its potential health benefits, over recent years canned meat, tuna and other processed foods has come to comprise up to 30% of the people’s diets. The dietary shift has been accompanied by an increase in noncommunicable diseases and illnesses in Baniata, such as diabetes, stroke, heart disease and vitamin deficiency, according to a recent study.

The challenges of climate and modern foods

The U.N. report also revealed that the traditional food system is increasingly affected by climate change. As a country comprising many low-lying islands, the Solomon Islands is no stranger to the direct impacts of climate change and associated sea level rise.

For the Baniata community, they are seeing more pest and disease attacks on their crops than in the past. Shane Tutua, manager of the Zai Na Tina Center for Organic Systems, a farmer support organization based in Honiara, the capital, said the community is also struggling with longer rainy seasons, which spoil crops and lead to food shortages that simply did not occur in the past.

Tutua, who is a Solomon Islander himself and co-author of the U.N. report, said low-lying parts of Baniata could be flooded by sea surges driven by climate change. With the Solomon Islands’ population forecast to double over the next few decades, the demands on land for housing, schools and cultivation will inevitably increase. Further, due to Baniata’s location between the mountains and the ocean, there’s not a lot of land to accommodate this expansion.

“Affected villagers will be forced to move [their houses] inland and take up areas that are supposed to be for gardening, so that could really impact the food system,” Tutua said.

Although the implications of climate change are clear, Tutua said the most immediate threat to Baniata’s Indigenous food system is the shifting preference toward sweeter, modern crop varieties and processed foods. Imported crops are gradually replacing Baniata’s traditional, more nutritionally rich varieties, and knowledge of how to cultivate, prepare and cook the latter is dwindling. Simultaneously, the convenience of processed foods is resulting in neglect of cultural traditions around hunting, fishing and gathering wild foods.

Hope is the next generation

Nonetheless, the report authors said they’re hopeful that the Baniata community will be able to preserve the food system because they know what is at stake should they lose their Indigenous food knowledge. “Community members realized that they have lots of knowledge to share and that if they don’t do anything, [that] knowledge will be lost,” Vogliano said, adding that the next step should be to transfer knowledge to young people.

During his research, Vogliano found that young people in Baniata still enjoy the tastes of traditionally cultivated and wild-collected foods, so “hope is still alive” to safeguard the food system, he said.

And the Baniata community are not alone in their journey. The Kastom Garden Association (KGA) is a grassroots nonprofit established to empower rural communities in the Solomon Islands with the skills, seeds and materials to maintain healthy and nutritious agrobiodiversity. Through the KGA, young people are learning how to grow and sell crops as part of their communities and families.

Pitakia Tikai, who manages the KGA, said more work is needed throughout the Solomon Islands to fully recognize the deep connections between food, environment, soil and people.

“We need to work with young people to let them value our local foods — which are much healthier than the processed food,” Tikai told Mongabay in an email. The “traditional farming system is a safer and environmentally-friendly farming system. Food supply is steady throughout the year [and] mixed cropping systems provide a wide range of foods that are healthy and good for people to eat.”

According to Vogliano, preserving Indigenous and traditional knowledge is vital since the transition toward simpler, less-nutritious diets is a global problem. “It is so important to pay attention to the loss of traditional knowledge,” he said, “because this knowledge holds wisdom to help rebuild more sustainable, diverse, and resilient food systems both locally in Solomon Islands and across the world.”

Related listening from Mongabay’s podcast: A conversation with Victoria Tauli-Corpuz and Zack Romo about Indigenous rights and the future of biodiversity conservation. Listen here: