Virunga National Park’s forests are some the most biodiverse in Africa and among the last bastions of mountain gorillas, okapis, Ruwenzori duikers and many other endangered species. Guarded by some of the highest, most inaccessible mountains on the continent, as well as the international scrutiny afforded by its designations as a national park and UNESCO World Heritage Site, large portions of Virunga have escaped – at least comparatively – the deforestation wrought on the land that surrounds them in the Democratic Republic of Congo (DRC) as well as across the border in Uganda.

However, these sanctums may be crumbling. Satellite data from the University of Maryland (UMD) show deforestation of Virunga National Park’s primary forest more than tripled between 2017 and 2018. And while it settled back down somewhat in 2019 and 2020, preliminary data from UMD’s Global Land Analysis and Discovery (GLAD) lab show 2021 may be a particularly rough year for the park’s forests, with the lab detecting several “unusually high” spikes of deforestation activity so far this year. 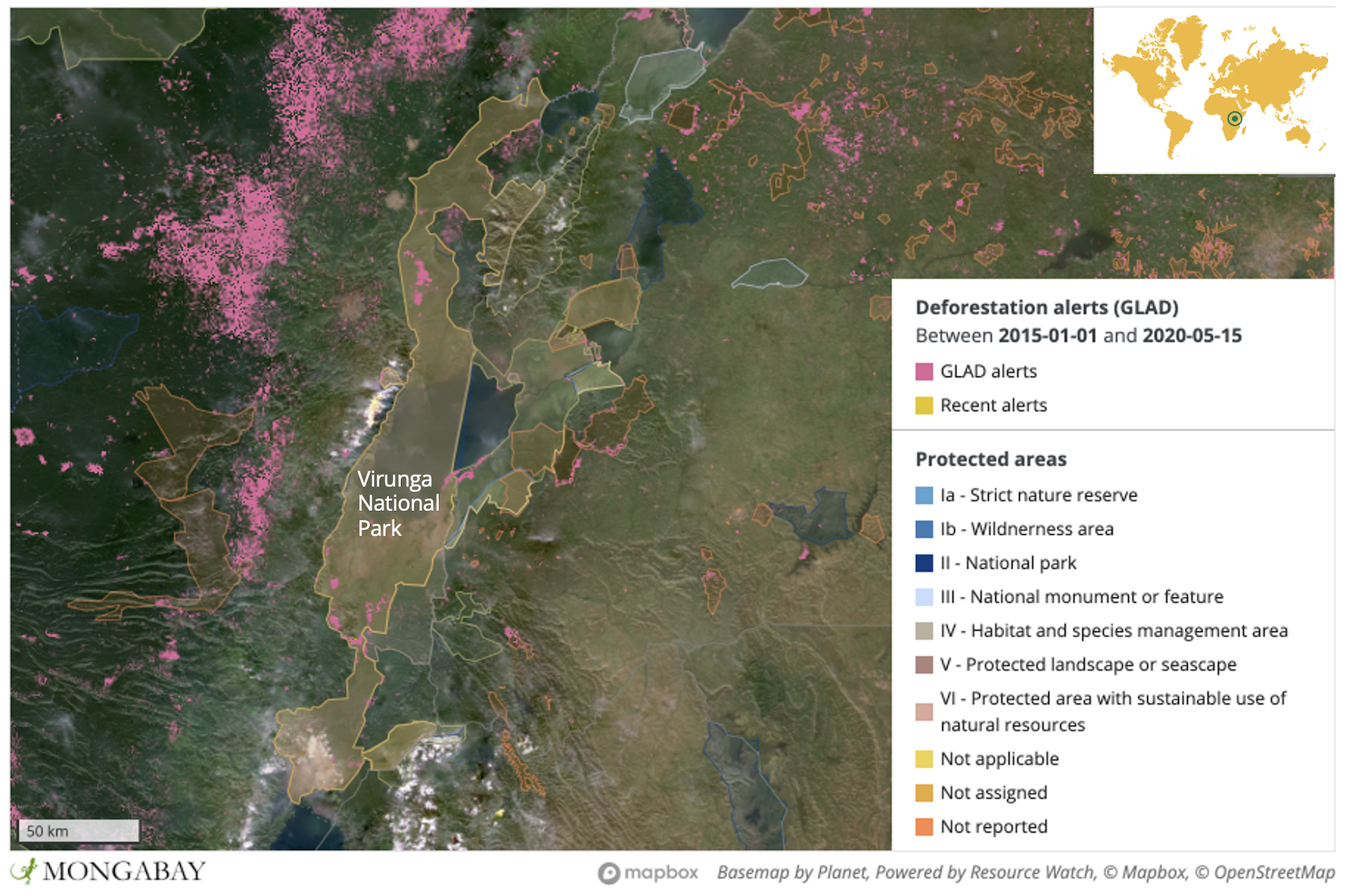 UMD data show primary forest in the southern part of the park is experiencing the brunt of 2021 deforestation, and satellite imagery reveals clearings eating away into old growth rainforest. According to the Alliance for Zero Extinction, this forest is home to the montane shaggy rat (Dasymys montanus) and the montane mouse shrew (Myosorex blarina), both of which are listed as endangered and are only found in this little corner of the world. The primary threat to their continued existence is habitat loss.

One of the biggest drivers of deforestation in Virunga is logging for charcoal, which is produced by burning wood in specialized kilns to remove water and make it more suitable for cookstoves. Charcoal fetches high prices at markets – so high that it’s referred to as “black gold” – which has prompted the formation of organized crime networks that log and ferry trees out of the park. Clearing for agriculture is also coming at the expense of Virunga’s forest.

The situation came to a head in April 2020, when 12 Virunga rangers and five civilians were killed, marking the worst instance of violence documented in the history of the park. Then, in early January 2021, six more rangers were ambushed and killed by a local militia group.

“Virunga National Park deeply regrets the tragic loss of life among its Rangers, who work tirelessly and with dedication to protect both the Park and the neighbouring communities from the tyranny of armed groups. Their sacrifice will not be forgotten nor be in vain,” the park said in a statement posted on Twitter in January.

Onesphore Sematumba, Great Lakes researcher with the International Crisis Group, said antagonism between rangers and local militias is partially rooted in land disputes that stretch back to the establishment of Virunga National Park in 1925. Poverty also plays a driving role in the desperation for land and fuel here and elsewhere in the DRC; with few other options, the communities that surround Virunga depend on charcoal cookstoves, subsistence agriculture and bushmeat poached from forests.

“You have the [park management] on one hand, and then on the other side you have the population that mostly lives off agriculture, and they need access to land to survive,” Sematumba told Mongabay in January. “And they believe a lot of land has been taken by the park and is available for the animals, whereas they need it as well.”

Banner image by Rhett A. Butler/Mongabay.

Editor’s note: This story was powered by Places to Watch, a Global Forest Watch (GFW) initiative designed to quickly identify concerning forest loss around the world and catalyze further investigation of these areas. Places to Watch draws on a combination of near-real-time satellite data, automated algorithms and field intelligence to identify new areas on a monthly basis. In partnership with Mongabay, GFW is supporting data-driven journalism by providing data and maps generated by Places to Watch. Mongabay maintains complete editorial independence over the stories reported using this data.

Feedback: Use this form to send a message to the editor of this post. If you want to post a public comment, you can do that at the bottom of the page.