Deprived of their forests, Uganda’s Batwa adapt their sustainable practices

KISORO, Uganda — It’s been three decades since the Ugandan government evicted the Batwa people, an Indigenous group commonly known as Pygmies, from their forest lands. The reason for their displacement was to create national parks aimed at protecting biodiversity and promoting tourism.

The conservation areas that sprang up in this southwestern corner of Uganda are Mgahinga National Park, Bwindi Impenetrable National Park, and Echuya Forest Reserve. All are home to endangered mountain gorillas (Gorilla beringei beringei), with Bwindi hosting approximately half of the global population of this subspecies. Yet these forests were also the ancestral lands of the Batwa people, who hunted, gathered and made medicine cultivated from endemic tree species. Today, a large portion of the minority Batwa population live in Kisoro district, on the border with Rwanda and the Democratic Republic of Congo.

Since their eviction in the early 1990s, their livelihoods and culture have largely suffered, and many Batwa became squatters living in extreme poverty. The evicted didn’t receive adequate compensation or resettlement from the government, for which Uganda’s highest court ruled only this year that the government was culpable. Some members currently reside on land donated by churches, such as the Michinga Batwa settlement camp given by the Diocese of Muhabara. Other members were resettled by groups such as the Gorilla Organization (GO) and the United Organisation for Batwa Development in Uganda (UOBDU). The latter has created approximately 33 Batwa settlements in Kisoro.

The Michinga Batwa settlement, located on the outskirts of Kisoro, is one of the most devastated Batwa camps in the district. It comprises shacks covered by ripped tarpaulin sheets, home to some 100 people who share a single latrine facility. When Batwa members try to hunt and gather within their ancestral lands, they often face persecution for illegal poaching within national park boundaries.

“Ever since we were chased from the forest and rendered landless, no one has allowed us to even use their farmland to farm,” said Patience Akankwasa, a Mutwa (the singular word for Batwa) mother of six while she burned plastic bottles and tires to build a fire for cooking. 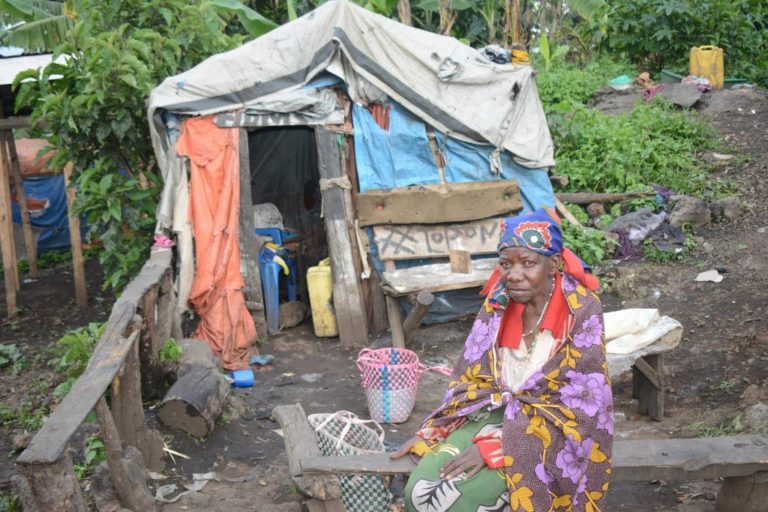 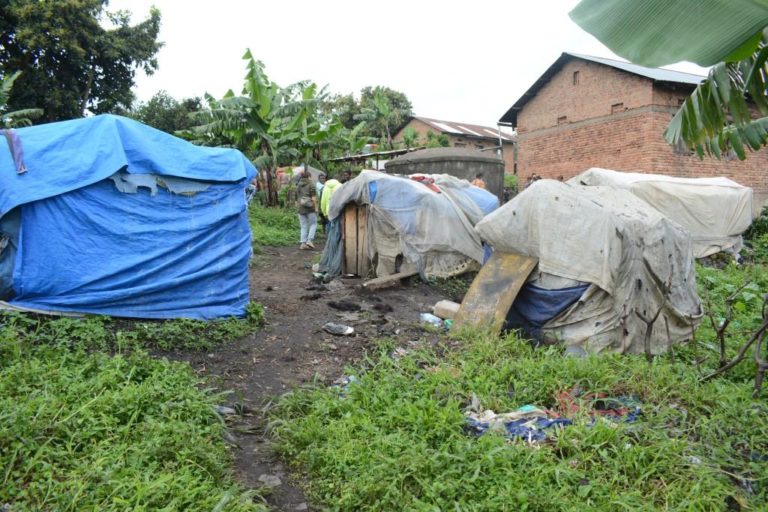 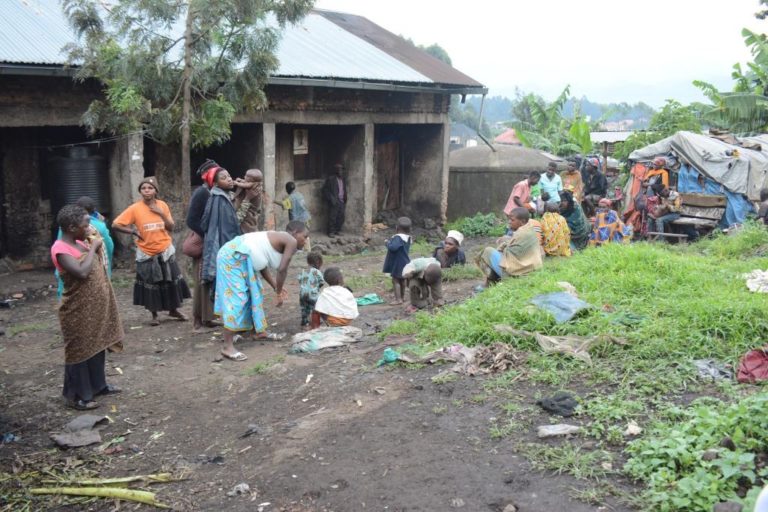 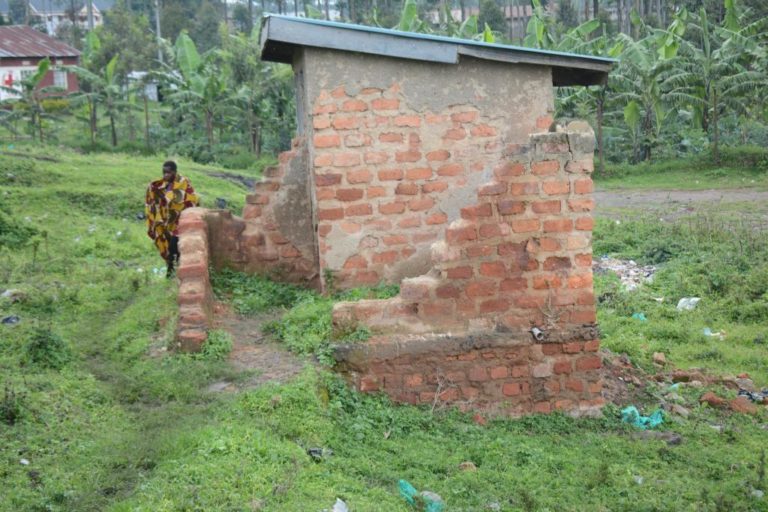 According to Kaben Robert, chair of the Michinga Batwa settlement, most people now derive their livelihood from begging and collecting food remains from garbage pits. Some work as cheap farm laborers for neighboring ethnic groups, such as the Bafumbira and Bakiga people. Nearly a fifth of Batwa children are malnourished, and the group’s average life expectancy is just 28 years.

Assimilating into the national fold has proved difficult for the Batwa. According to a recent report by the Minority Rights Group, the Batwa face elevated rates of systematic discrimination in education, health care and employment in Uganda. Extreme exclusion has meant only 0.5% of the Batwa community has access to full secondary education, according to the MRG report. Historical marginalization has also led to discrimination within the nation’s health care sector, with staff either humiliating Batwa patients or limiting their access to services. In a 2006 study published in The Lancet, the child mortality rate for Batwa infants was found to be nearly four times higher than the national average.

“There have been cases of Batwa being turned away for a private clinic which many cannot afford,” said Abel Bizimana, a local council chair for Kisoro district. “When I was running for chairman for local council five, some locals were trying to stop my campaign on grounds that I was a Mutwa.”

Samson Werike, a conservation researcher who doubles as the regional programs manager at the Gorilla Organization, emphasizes the sustainability of traditional Batwa practices in keeping the forests intact.

According to Bizimana, preserving traditional Batwa nature-based solutions for biodiversity conservation is difficult as elders and parents no longer have access to ancestral forest lands, and little access to natural resources, to pass down traditional sustainable practices to their children.

“There is no way we can keep our values and practices when we have no land,” said Elias Ssegitondo, a Mutwa from a village neighboring Kisoro. “We have just become squatters.”

As hunter-gatherers living in the forests for millennia, the Batwa people are noted to not only have preserved the ecological integrity and biodiversity of forests they depended on, but to have passed down knowledge about the behaviors of various animal species. Also known as adept honey gatherers, older members of the Indigenous group hold detailed information about the forests’ honeybee nests, nesting trees, and predator behavior. When conducting field research into the honeybee population (Meliponula spp.) of the southwestern Ugandan forests in 2006, conservationists often consulted Batwa community members near the parks as guides to discover where most of the nests were located and how chimpanzees moulded sticks to harvest honey.

“The dwarf honey-guide (Indicator pumilio), a tiny bird that is endemic to the Albertine Rift Mountains, helped direct the Pygmies to stingless bee nests,” the study says. “[B]aboons and chimps also follow the guiding calls of Indicator to locate nests of honey bees.”

Despite their circumstances, some Batwa groups who have received land purchased by UOBDU are adopting new conservation practices involving regenerative agriculture. Among them is the Buraara Batwa settlement, home to some 65 members. Francis Ssembagale, a Mutwa from the community, said that although they were unable to keep their traditional conservation practices, they have begun terracing their gardens, planting local trees and growing crops using agroforestry methods.

The terracing method used, called fanya chini, serves to encourage water retention, prevent soil erosion, increase crop yield, conserve local plant biodiversity, and extend the growing season through slow but regular irrigation that improves soil moisture. It involves digging a trench 60 centimeters (2 feet) deep at the top of the garden and heaping soil on the lower side to create a grass or shrub barrier. Before adopting this practice, members of the community used to experience heavy soil erosion when they tried to farm on small plots of land.

Another practice to increase productivity and yield on small plots of land is the “sack garden.” Old sacks measuring 1 m (3 ft) from nearby communities are filled up with a mix of clay and sandy soil. At the base of each is a cylinder of rocks so that water can be properly distributed when moving horizontally and vertically. The sacks are kept standing upright and several holes are poked at their sides. Larger vegetables are planted at the top of the bags, and lighter leafy greens are planted around the sides.

The trees grown in the agroforestry practice here are mainly mangoes and oranges. They’re intertwined with other species, such as the medicinal and drought-resilient neem tree (Azadirachta indica) to give the fruit trees shade and improve soil biodiversity.

“We make sure that there are trees around all our gardens, including certain species such as bamboo which we used to have in the forest,” Ssembagale said. “We plant them around our gardens to provide medicine.”

Limited access to resources for farming, such as forest soils and organic matter, has made agroforestry and the use of manure important to improve the quality and productivity of the soils found in the settlements. Under a UOBDU program taught to members of the community, the use of chemical fertilizers is discouraged.

“We make sure they use local manure for fertilization as modern fertilizers can pose dangers to the nutrients and organic matter of the soil,” said Winfred Mukandinda, a land rights officer with the UOBDU.

According to a study on land degradation in Uganda, soil degradation is a substantial problem in the country, despite having a large percentage of arable land. It’s estimated that 4-12% of gross national product is lost due to environmental degradation, of which 85% is due to soil erosion, nutrient loss and changes in crops. Land degradation hovers at around 90% in the southwest. The UOBDU has recently provided water-harvesting tanks for the community to further prevent water runoff and erosion in the hilly region.

Mixed with their new regenerative agricultural practices, members of the Buraara Batwa community are striving to pass on to their children the little traditional knowledge they still retain and can apply. The situation the Batwa people in Uganda find themselves in after three decades isn’t unique. According to one analysis, 250,000 individuals were displaced in 15 countries from 1990 to 2014 for the creation of conservation areas.

In the face of the potential expansion of conservation areas and national parks to meet the Post-2020 Global Biodiversity Framework’s target to preserve 30% of land and ocean by 2030, many other Indigenous groups say they fear they may suffer the same kind of displacement and poverty as the Batwa people in Uganda. While preparations for the COP26 climate summit and the COP15 biodiversity summit are underway, Indigenous rights organizations say they hope to bring forward the case that Indigenous peoples are integral to biodiversity conservation and climate solutions.

Banner image: Batwa Pygmies were evicted from their home lands in the forest in the early 1990s when the Mghinga Gorilla National Park was established, leaving them landless and poor in a society that saw them as a lower class. Image courtesy of USAID Biodiversity & Forestry / Flickr.

Related listening from Mongabay’s podcast: A conversation with Victoria Tauli-Corpuz and Zack Romo about Indigenous rights and the future of biodiversity conservation. Listen here: