Dual Storms in the Andes Mountains 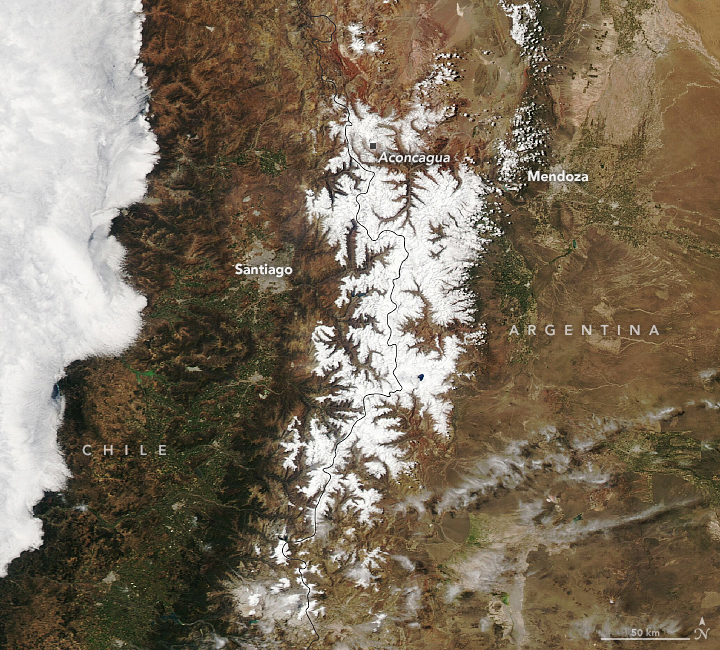 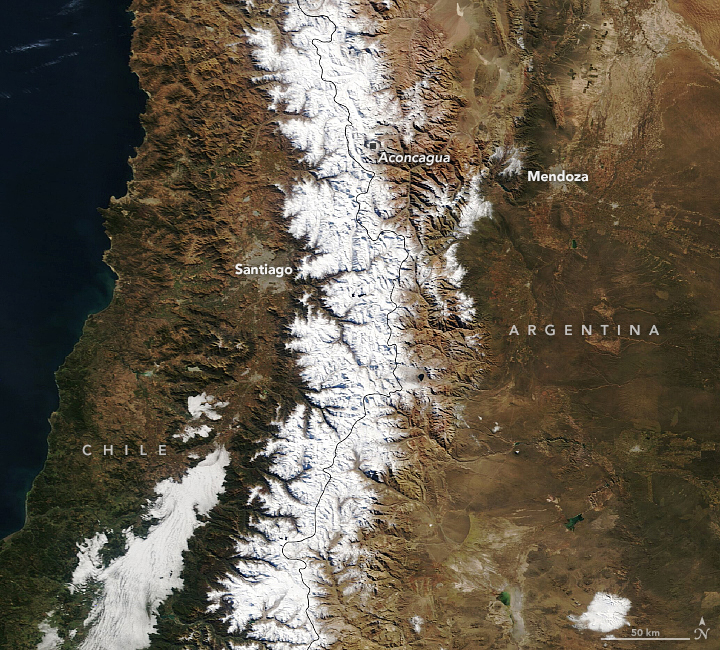 With winter looming in South America, the first major snowstorm of fall 2021 has blanketed the Andes Mountains near central Chile and Argentina. The event was typical in both its timing (mid-May) and the distribution of snowfall (primarily on the range’s western side). But not all storms in this region are quite so ordinary. Four months earlier, a rare winter-like storm struck the region in the middle of austral summer, with drastically different consequences.

The snow cover after each storm is visible in these images, acquired with the Moderate Resolution Imaging Spectroradiometer (MODIS) on NASA’s Terra and Aqua satellites. Snow from the unusual summer storm (left) is juxtaposed with the fall-season storm (right), illustrating the different expressions of warm and cold season storms over the Andes.

The right image was acquired on May 23, 2021, a few days after a cold front dropped 20 to 30 millimeters (about 1 inch) of precipitation. Most of the precipitation fell as snow on the range’s western side, which is typical of cold-season storms that approach the Andes from the west.

“These are beneficial storms, forming the seasonal snowpack during winter that gives water in spring and summer,” said René Garreaud, an Earth scientist at the University of Chile. “Central Chile has experienced a prolonged drought, so all of these winter storms are truly welcome.”

In contrast, the summer storm of January 30-31, 2021, dropped up to 100 millimeters (4 inches) of precipitation when a strong atmospheric river doused the region with ocean moisture. The storm’s strong westerly winds at mid-levels in the troposphere helped the snowfall spill over the tall ridges of the Andes onto the range’s eastern side. Snow from the summer storm is visible in the left image, acquired on February 4, 2021.

“The January event was truly extraordinary,” Garreaud said. “Central Chile is bone-dry during summer, except for a few scattered convective storms over the highest peak of the Andes. But this event was like a winter storm—and quite a surprise.”

Given that the summer storm occurred in a relatively warm environment, snow was restricted to the highest peaks and areas over 3,500 meters in elevation. Most of the storm’s precipitation fell as rain, causing flash flooding and damaging landslides. According to an analysis of the event, summer storms like this one are rare, occurring on average about every 40 years in Santiago.