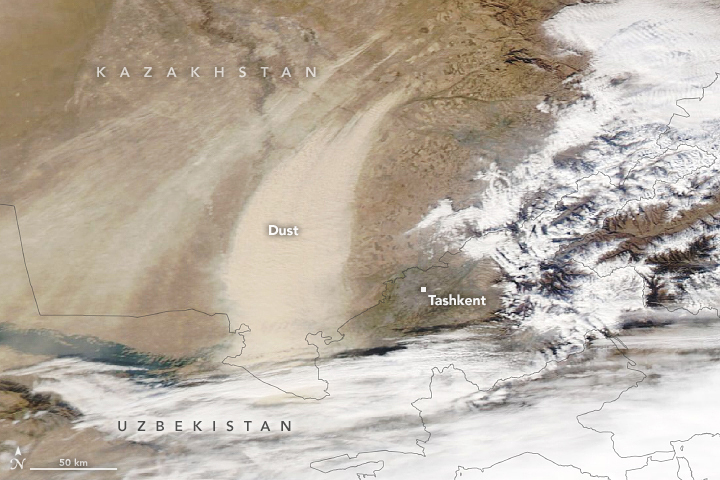 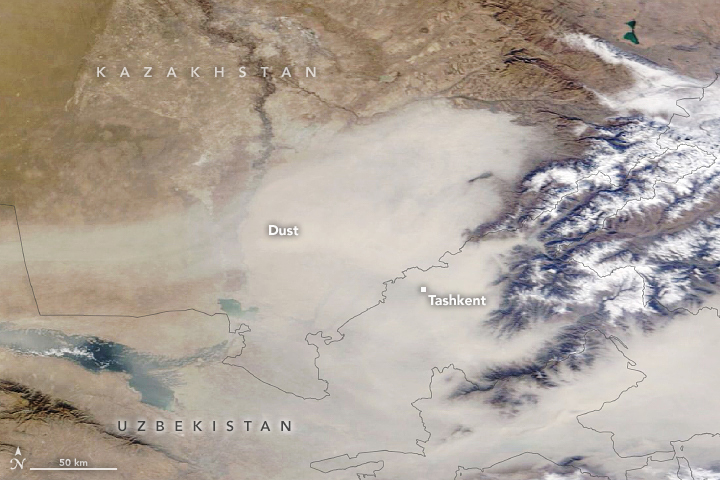 Dust storms are quite common across the dry, windy landscapes of Central Asia. Still, it is unusual for dust to darken the skies of a major city, as one recent storm did in Tashkent, Uzbekistan.

The vast dust pall was triggered by an anticyclonic storm that brought winds as strong as 70-90 kilometers (45-55 miles) per hour to Uzbekistan’s capital. At times, the air in Tashkent grew so thick with dust that visibility dropped to 200 meters. According to Uzbekistan’s weather agency (Uzhydromet), levels of coarse particulate matter (PM10) rose to 18,000 micrograms per cubic meter. At times, the concentration of dust in the air was 30 times what Uzbekistan considers acceptable. Across 150 years of monitoring, such extreme dust conditions have never been observed in Tashkent before, according to Uzhydromet.

The Moderate Resolution Imaging Spectroradiometer (MODIS) on NASA’s Terra satellite captured an image (left) of thick plumes of dust approaching Tashkent on November 4, 2021. Some of the dust appeared to come from parched farmland, pastures, and grasslands to the northeast in the Turkistan region of Kazakhstan. By the next day (right image), the plumes had spread out and a thick haze blanketed much of the region, including several mountain valleys to the east. A layer of unusually cold air near the surface topped by a layer of warmer air—a temperature inversion—concentrated the dust near the surface and contributed to the air quality problems.

“If the measurements are correct, those are truly extreme and extremely hazardous levels of particulate matter for an urban area,” said Thomas Gill, an atmospheric scientist at the University of Texas at El Paso. “The U.S. EPA’s 24-hour average limit is, for example, 150 micrograms per cubic meter for PM10. The highest hourly concentrations I have ever seen recorded in El Paso, Texas—arguably the dustiest city in the U.S.—are about 5000 micrograms per cubic meter for PM10. So these levels in Uzbekistan are about four times worse than I’ve ever seen in El Paso. These may be amongst the largest PM10 values ever measured for ambient air in an urban area.”