Folds of the Bighorn Basin 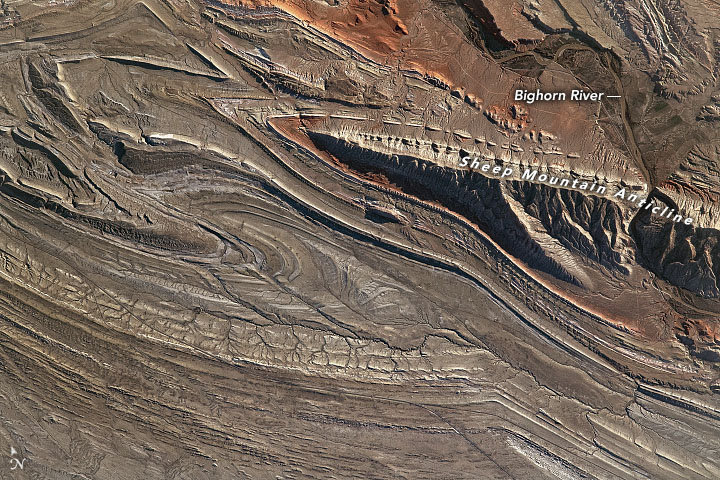 The Bighorn River flows through much of north-central Wyoming and southern Montana, cutting through the rugged and angular terrain of the Bighorn Basin. Red rocks and complex geology are distinctive features of this physiographic region. The semi-arid climate creates a sparsely vegetated environment where dramatic geologic structures are easily identified from space and from the ground.

An astronaut onboard the International Space Station (ISS) looked westward to take this photo, capturing the shadows from the local sunrise. Along the right side of this image, the Bighorn River is almost hidden amid the mountains due to the shadows cast into Sheep Canyon.

Located in Wyoming’s Rocky Mountains, Bighorn Basin is a large, oval-shaped depression and home to many rivers and geologic formations. This photo is centered on the Sheep Mountain anticline, a type of fold that forms due to compressional stress on rock layers. Geologic structures like this anticline are found throughout the Bighorn Basin and many are associated with oil and gas reservoirs.

Astronaut photograph ISS065-E-22937 was acquired on May 6, 2021, with a Nikon D5 digital camera using a focal length of 1150 millimeters. It is provided by the ISS Crew Earth Observations Facility and the Earth Science and Remote Sensing Unit, Johnson Space Center. The image was taken by a member of the Expedition 65 crew. The image has been cropped and enhanced to improve contrast, and lens artifacts have been removed. The International Space Station Program supports the laboratory as part of the ISS National Lab to help astronauts take pictures of Earth that will be of the greatest value to scientists and the public, and to make those images freely available on the Internet. Additional images taken by astronauts and cosmonauts can be viewed at the NASA/JSC Gateway to Astronaut Photography of Earth. Caption by Sara Schmidt, GeoControl Systems, JETS Contract at NASA-JSC.