For Indonesian farmers used to ‘instant’ results, going organic is a tough sell

PITU SUNGGU, Indonesia — Arief Sore holds up a clutch of desiccated rice stalks a short distance from the unusual arable field he tills in Pangkep district on Indonesia’s Sulawesi Island.

“These just need to be sown in the field before planting,” the middle-aged farmer said in September at his home in Pitu Sunggu village.

Arief is one of a few farmers in South Sulawesi province who have moved away from the expensive agrochemicals routinely used to eliminate pests and amplify harvests.

Between 1970 and 1990, application of chemical fertilizers in developing countries surged almost four-fold, while the use of pesticides grew by 7-8% every year, according to the Food and Agriculture Organization.

However, coating crop fields with chemicals can be inefficient — pesticides often contaminate watersheds, while as much as half of fertilizer is lost to runoff and leaching.

By the early 2000s, around a million Indonesian farmers had received training in organic farming from field schools that became models for other countries, according to the Pesticide Action Network, which campaigns to phase out the use of pesticides in agriculture.

But chemical fertilizers and pesticides retain deep roots across much of Indonesia’s arable land, according to Suhaerah Saleh, a lecturer in agriculture at the Indonesian Muslim University (UMI) in Makassar, the South Sulawesi provincial capital.

“The mindset is that any problems in agricultural land can be solved only with chemicals,” Suhaerah said. “Often with higher and higher doses.” 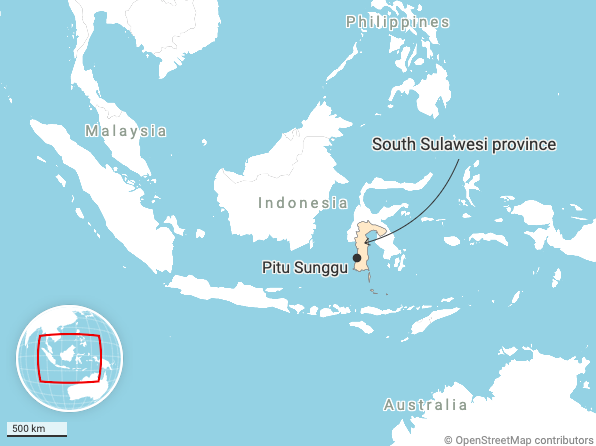 For more than a decade Arief has persevered with natural composting techniques he picked up in a course run by the Blue Forest Foundation, a Sulawesi-based charity focusing on watersheds, and Oxfam, a Kenya-based anti-poverty charity.

Most neighboring farmers scorned Arief when they first saw him gathering up mulch and household waste to make a homemade liquid fertilizer, he recalled. However, shifting methods from chemical products to bacterial fertilizers requires patience and resilience, Arief said. Several farmers who learned the same skills as Arief back in 2010 have reverted to conventional methods after being stung by early failures.

“In general, they can’t wait for results,” Arief said. “There are pest attacks and a longer harvest period — not to mention having to prepare their own organic fertilizers.”

Low-income farmers are ordinarily risk-averse because one crop failure can result in destitution, fieldworkers say.

Data from Indonesia’s statistics agency showed 12.3% of rural people in South Sulawesi province live below the regional poverty line, which is defined at about 350,000 rupiah ($24.60) per month.

“Farmers need assurance that, when using organic materials, there will be revenue,” said the Indonesian Muslim University’s Suhaerah.

Arief has even rolled out the composting method in the aquaculture ponds he farms here on the west coast of Sulawesi, an island about the size of Florida.

“At first there did not seem to be any success and things were slow — but over time we saw results,” Arief said, adding that productivity was now improving while the reverse was true for the other aquaculture ponds using chemicals.

“It really does take time to see results, and this is something that farmers generally can’t accept because they want it to be instant,” he said.

Arief set out to convince other farmers of the benefits of phasing out chemicals. He began selling his microorganism liquid fertilizer, which he manufactures using a makeshift electrical system.

“If the two electric poles connected by the [liquid fertilizer] can make a lightbulb light up, it means the quality is good,” he said.

“This is making many farmers use compost,” he said.

The concern over the availability and risks of chemical products in farming has attracted political interest from the provincial parliament, which is drafting a regulation to promote the kinds of methods used by Arief.

The impetus to draft a new policy stems from “the anxiety about the sustainability of life and healthiness of the environment,” said Haidar Madjid, a member of the South Sulawesi provincial parliament.

The discussion over how to expand composting techniques in the field is nothing new, according to Muchlis, the head of the infrastructure division at the provincial agriculture department. Muchlis said he had previously overseen training in composting for agricultural extension workers, typically poorly paid contract employees who provide technical training and business support to farmers on the ground.

“The problem is the implementation is still slow,” he told Mongabay. “With this regional regulation, it is certainly to be hoped our farmers can produce organic products in the future.”

For Suhaerah from the Indonesian Muslim University, the key question remains whether farmers will buy into a new way of working that brings risks of lower income.

But back in Pangkep district, Arief’s perseverance began to change opinions after he revitalized a stretch of degraded land that had sprouted only weeds for years.

“On a few occasions failure would get us down, but there was a determination to see how things turned out,” Arief said. “This is what motivates me every time I face a challenge and want to quit.”

Banner image of a farmer planting rice in Pangkep district, by Tri Saputro/CIFOR via Flickr.

This story was reported by Mongabay’s Indonesia team and first published here on our Indonesian site on Oct. 15, 2021.