A few years ago, alone on the top of a mountain in Zion National Park, in Utah, USA, I had an almost mystical experience that immediately transported me to the Illescas Peninsula, in Piura, Peru. Out of nowhere, a California Condor appeared with a number written on a plastic plate attached to its wing, perching a few feet from me. It was an extraordinary event because, one, it is a very rare species which “miraculously” was saved from extinction. And two, was that back in the early 1980’s, Illescas and I were directly involved with its survival mission. It was as if that condor had come to greet me … and whisper something in my ear.

By the late 1970s, it was clear that the California Condor was on its way to disappearing, as a result of poisoning, hunting, and habitat destruction. The annual censuses showed a significant drop in numbers. At the time, there was a bitter discussion about what to do. Some said that extinction was inevitable, and, as a matter of respect, we should let the species go in peace. Others, practical and stubborn, believed that they could be saved and that it was necessary to act quickly and radically. When only 22 of them remained in the wild, flying freely in the skies of North America (in addition to some in captivity), the U.S. Fish and Wildlife Service (USFWS) decided to act. With the technical support of scientists, led by the San Diego Zoo, they proceeded to capture them all. None were left free. It was all or nothing.

The Illescas peninsula: a surreal place

In the 1980s, the Illescas peninsula was one of those almost inaccessible places, with a surreal air about it. It was the only known site on the coast where the Andean Condor nested. What made it even more appealing was that, from that point of the northern coast where the Humboldt current flows away from the mainland in the direction to the Galapagos Islands, there were no towns or roads to or from the nearest city, Chiclayo. Just a stretch of 200 kilometers of a completely pristine beach, the longest in Peru. To get there you had to be very well equipped.

Furthermore, feral populations of donkeys and goats, introduced animals of unknown origin, were known to exist there. The mountains, rising at the edge of a sea with colonies of sea lions and whale bones stranded in time, in the middle of a desert full of attractive animals, such as the tiny Sechura foxes and coral snakes, were the dream of a young biologist.

A bold, but risky plan to save the California condor

The California Condor, beyond being the largest North American bird, has a religious and magical significance for the ancestral and modern cultures of its country. The idea of catching them seemed risky and bold. The plan was to reproduce the California Condor in captivity, and while the causes that led to their near extinction were corrected, they would be re-introduced into the wild to repopulate their original territories. Very little was known about them, and at the time, no one had experience with such a program. Those biologists were literally putting their necks on the line, but they did have high hopes and an appropriate budget. Though captive breeding techniques had already been developed, reintroducing birds to the wild was more difficult, even more so for a bird of that size and wide flight range. And, if successful, would they survive in freedom? Would the effort have served any purpose?

Experimenting with the techniques this endeavor demanded was a great challenge, and such a limited number of California Condors could not be put at risk in testing them. A substitute was needed. Voila! The Andean Condor is the closest and most similar relative to that of the California Condor, and therefore, it had to help to save it. The plan also needed a safe place where it could be carried out, one with wild condors and free from human interference. And this is how we got to the Illescas Peninsula in Peru, the perfect place for it. An existing captive population of Andean Condors in the United States, probably of Peruvian origin, was chosen for the task, and their chicks were the focal point. The chicks, born and cared for in captivity at the San Diego Zoo, were fed for more than a year with puppets in the same way as their parents would (even imitating their caring sounds), and totally isolated so that they would not get imprinted with people. Can you imagine the patience of the technicians? Something like this can only be done with a lot of love and dedication.

With the support of both governments, these Andean condor chicks, already fledged and ready to fly, were brought to Peru in the early 1980s, and carefully taken to the Illescas peninsula. Such an important cargo demanded major efforts without making it news to anyone. They were released in places that may once have been nests and then monitored around the clock, 24/7. At the same time, several wild Illescas condors were caught and tagged, to monitor the local population and to learn about their social life, critical information for the program. Each Andean Condor, imported and native, carried on its wing an individual identification, and a transmitter of location data. In addition, these carried a small solar panel that powered the devices. Everything had to be very small and light, and at the time, it was like science fiction. Those were the beginnings of a satellite tracking technique widely used today. The condors were permanently followed to find out about their movements, or … if they were alive. As a field research assistant, I was one of those dedicated trackers.

The experience of living 24 hours a day for months, without Sundays or holidays, wandering with a telescope through the desert and the mountains, alone, and in special dune buggies for the program, was unforgettable. I remember being awakened at night – from the holes I made in the sand to sleep – by feral donkeys, who were more surprised than I by the encounter. And for the condors, my dearest extra-large chicks, I developed an almost paternal affection. While sometimes my only entry for the day was that “at 3:42 pm one of them had scratched its butt,” it was never boring. Other times I witnessed wild condors — adults totally alien to the Peruvian-North American chicks – coming to feed them as adoptive parents. The community cared for the young! That time was undoubtedly one of the most spectacular in my life.

Applying lessons from Peru to California

Making a long and rich history short, there in Illescas, techniques were developed that later were used to save the California Condor. Thanks to its brother, the Andean Condor, scientists learned (and put into practice) what was the proper care to be taken, the times and dependency factors, the gear to be used, and above all, about the sociability of these wonderful animals. Well, coincidentally now, it is a tremendous joy that that place where all this happened is about to be declared as the “Illescas National Reserve.” This beautiful place is finally being categorized and protected for its own biological and geological attributes. It is one of the westernmost continental points of Peru, with the last remnant (to the north) of the old coastal Cordillera (mountain range). These conditions created the environment where species unique to Illescas flourished, and a mixture of warm and cold environments, with mangroves, fog Loma vegetation, penguins, dozens of migratory bird species, as well as a healthy population of the endangered Andean Condor. All this thanks to SERNANP (the Peruvian Park Service), the Piura authorities, and the Sechura desert peoples. 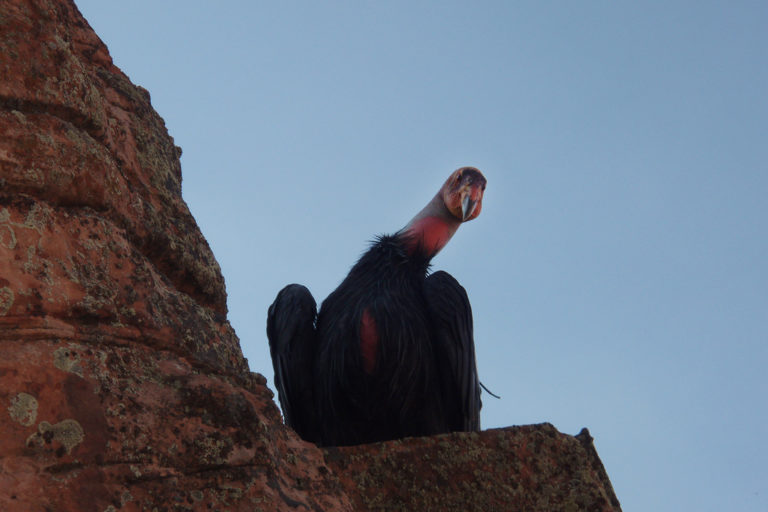 Hours later, already recovered from the encounter with the wild Condor in Utah, I relayed my experience to a park ranger, and he probably thought I was under the influence of a hallucinogen. Well no. See the photo that proves it. Ten years after Illescas, the California Condors were reintroduced to the wild in various places in the United States, and today there is a growing population of about 350 flying freely. They were spared from joining the list of confirmed extinct species, which includes the massive Ivory-billed Woodpecker, among other unfortunate creatures. Thanks to the Andean Condor and the future Illescas National Reserve, the California Condor was saved. Ahh, condor friend from Utah, you’re welcome!