In Indonesia, a coastal town rejects ‘metropolitan’ model for mangroves

TERNATE, Indonesia — At the inauguration of the Guraping Mangrove Tourism Forest last month in Sofifi, a sleepy coastal town and capital of one of Indonesia’s remotest provinces, North Maluku Governor Abdul Gani Kasuba took a playful jab at the nation’s president.

“Pak Jokowi was surprised that the province of North Maluku would dare to move its capital to a village in the middle of the forest,” the governor said, referring to President Joko Widodo by his nickname. “Now, that forest is where you all stand, beneath the trees.”

In 2010, North Maluku, a province of around 1 million people in eastern Indonesia, moved its capital from the tiny volcanic island of Ternate to Sofifi. While Sofifi’s population of 18,000 is only around a tenth the size of Ternate’s, it sits on the vastly larger island of Halmahera, giving it more room to grow. 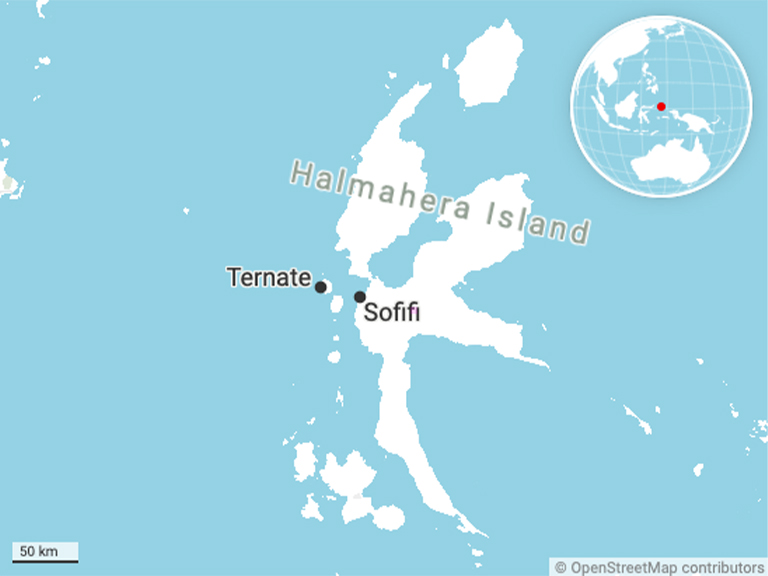 Some local officials have said they want Sofifi to become a “metropolitan city” — a vision the president scorned during a 2015 visit to the town. “Don’t allow this city to become metropolitan, it will only become like Jakarta,” Widodo said at a dialogue event, referring to the nation’s congested capital, earning cheers from the audience. Cities like Sofifi, he said, should be developed based on their “unique heritage,” not foreign models.

But while Widodo’s separate, signature plan to move Indonesia’s capital from Jakarta to a location on the island of Borneo is backed by tens of billions of dollars, planners in North Maluku have far fewer resources to work with.

So, to boost its economy, Sofifi is turning to one of its natural assets: its mangroves. Hence the grand opening of the Guraping forest, which officials hope will draw tourists to the town and help it develop into something greater than an administrative hub.

As the only trees capable of growing in the salty waters of intertidal coastal zones, mangroves are incredibly efficient carbon sinks and highly effective at protecting coastlines from damage caused by extreme weather. Indonesia is a mangrove powerhouse, home to about 23% of the world’s mangroves.

But despite their heartiness and ecological importance, much of Indonesia’s mangroves have been destroyed or are threatened due to development. This is particularly true in North Maluku, which has around 55,000 hectares (136,000 acres) of mangroves that environmentalists warn are rapidly being cleared to make way for commercial enterprises such as cassava plantations and mineral extraction.

The Guraping forest is located right by the governor’s offices at the top of Sofifi’s Gosale Hill, a spot that offers impressive views of both the mangroves and the sea.

While the sights are scenic, they also illustrate Sofifi’s lack of infrastructure development. In the 11 years that Sofifi has officially been the provincial capital, a lack of planning and budget resources has prevented it from seeing much growth beyond a few government facilities.

In July, Indonesia’s chief investment minister, Luhut Binsar Pandjaitan, said the central government was investing in Sofifi’s development by making it a major component of the nation’s 2020-2024 Medium-Term Development Plan (RPJMN), with plans to build supporting infrastructure such as office buildings, homes, and schools.

A narrow strip of the forest extends out and around the edge of the coast, forming a picturesque lagoon that resembles a lake. A bridge into the tourist area cuts across the mouth of the lagoon.

Research conducted in 2016 by two environmental scientists — Abdul Muthalib Angkotasan, a lecturer of marine science at Khairun Ternate University, and Husain Marasabessi, a lecturer of forestry at Pattimura University in Ambon — found that the mangrove forests in Guraping’s waters were well developed for ecotourism. Their biodiversity inventory identified 10 different species of mangroves in the forest, and six plant species symbiotically linked to the mangroves. They found the dominant type of mangrove species in the forest to be Rhizopora apiculata and Rhizopora mucronata.

The dense network of roots that mangrove trees use to stubbornly stay in place with the rise and fall of the tide is what makes them so important to the integrity of coastal lands. During extreme weather events, mangroves prevent soil erosion and blunt the impact of strong winds and tall waves.

Mangroves also teem with animal life. The researchers also found a number of species living within the watery forest, including fish such as grouper and trout, and a wide variety of birds.

The Halmahera Wildlife Photography Community (HWP) of North Maluku helped catalog the mangrove’s many birds and found they came from numerous regions. Some they saw even came from the Northern Hemisphere, such as the Eurasian whimbrel (Numenius phaeopus) and the greater crested tern (Thalasseus bergii), demonstrating that the mangrove forest is a stopover habitat for many migratory birds as well as bird species endemic to North Maluku.

Syukur said the inauguration of the mangrove tourism zone took place on Oct. 18 to coincide with a national Quran recital competition that was taking place in Sofifi at the same time.

“It is hoped that the mangrove forest can be a place of recreation for groups and officials to unwind down after competing,” Syukur said. “Also for other people who want to travel while learning because the main concepts behind the [tourist area] are conservation, education and recreation.”

Banner image: Mangrove trees on Hiri, an island near Sofifi, with Ternate’s Mount Gamalama looming in the background. By Sanjay P. K. via Flickr (CC BY-NC-ND 2.0).

This story was reported by Mongabay’s Indonesia team in an article published here on our Indonesian site on Oct. 28, 2021.