Indonesian farmers resisting an iron mine run up against a sultan

This article is the result of a collaboration between Mongabay, Gatra, SoloPos.com, KabarMedan.com and Merdeka.com.

KULON PROGO, Indonesia — On the coastline south of one of Java’s oldest kingdoms, a group of chili farmers grapples with a centuries-old sultanate on ancient plains of dark sand.

Farmers here like Widodo in the district of Kulon Progo, one of more than 500 regional administrations in Indonesia, used to be demeaned as wong cubung, a Javanese pejorative meaning “little people.”

But today the area produces stout harvests of red chili, watermelon and vegetables, sending food staples to markets in other parts of the world’s fourth-most populous country.

“We keep farming forever — we keep earning our living forever,” Widodo, who like many Indonesians goes by one name, told our reporting team in Kulon Progo.

Kulon Progo, which spans nearly a fifth of Yogyakarta, the only province in Indonesia still governed by a sultan, produced 37,000 tons of chili in 2020 alone, according to statistics agency data.

But that could change as early as next year as a major project begins excavating the metals that have lain dormant in the ground here for thousands of years. 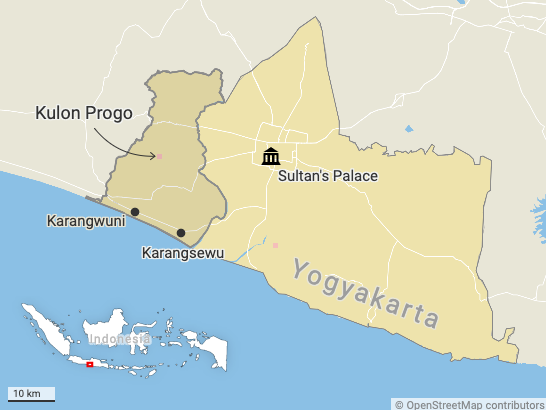 For the past 15 years, these farmers have persistently rejected plans by PT Jogja Magasa Iron (JMI) to mine the iron sand on the southern coast of Kulon Progo.

Iron sand is formed by the dispersal of iron ore from prehistoric volcanic eruptions on shorelines by coastal currents. The iron oxide extracted from the sand can be processed to manufacture wrought iron and steel.

Research by the Yogyakarta-based College of Aerospace Technology shows iron sand content on the Kulon Progo coastline as high as 76.4%, alongside valuable deposits of titanium.

“This titanium would be suitable as a basic material for aircraft manufacture,” said Indreswari Suroso, a researcher at the aerospace college.

But farmers like Widodo and Dwi Purwanta, an official from Karangwuni village, said the planned change in land use would raze an agricultural economy that sustains thousands here in Kulon Progo.

“When I was little the name Karangwuni was made fun of by people from the north,” Dwi said, referring to those living in urban areas.

“Coastal people can buy motorbikes and cars, while people in the north need to go into debt to buy a bike or car,” he said.

In April this year, the Kulon Progo farmers turned out in navy blue shirts on Jalan Daendels, a main coastal road set less than 2 kilometers (1.2 miles) back from the southern shoreline. They protested against plans for the new iron sand smelter, and the impact on a turtle release site on Trisik Beach.

“If anyone invades the space where we live, we resist,” said Widodo, who is coordinator of the Kulon Progo Coastal Farmers Association.

But the demonstrations against JMI set the Kulon Progo farmers against a unique, seemingly unassailable adversary.

The royal court governing this part of Java Island has clung to power through a succession of would-be usurpers.

Formally established in 1755 under the Treaty of Giyanti (although the family bloodline dates back centuries), the Yogyakarta sultans have outlasted Dutch, British and Japanese occupation. The royals have even won exception from Indonesia’s democratization, which began when the dictator Suharto stepped down in 1998 after more than three decades in power.

In 2012 the central government under then-President Susilo Bambang Yudhoyono allowed Sultan Hamengkubawono X to serve as governor for life of the special autonomous region. Yogyakarta is the only province in the world’s third-largest democracy to employ such a governance arrangement.

But Yogyakarta’s royals also moonlight as captains of local industry, supported by extensive landholdings grandfathered in from the old kingdom.

The sultanate of Yogyakarta stakes its land claims on a 1918 fiat passed by the Dutch East Indies colonial administration, which did not formally recognize Indonesia’s independence until 1948. “Rijksblaad Kasultanan No. 16/1918” in effect designated the sultanate as owner of all land not claimed by the Dutch at the time.

In Kulon Progo, swaths of land are marked with stakes and the initials PAG, which stands for Paku Alam Ground, denoting land claimed by the Duchy of Pakualaman. Pakualaman is a small princedom ruled by Paku Alam X, who is also the deputy governor today of the Yogyakarta special autonomous region.

But these claims should have been confined to the history books by laws passed under Indonesia’s government following independence in 1945, said Kus Antoro, who researches agrarian reform.

In 1984, Suharto issued an executive fiat clarifying that Indonesia’s 1960 Basic Agrarian Law, the basis for land law in Indonesia, applied in Yogyakarta.

“It is clear that all claims based on the Rijksblaad Kasultanan or Rijksblad Pakualaman are no longer valid,” Kus said.

But application of national laws in Yogyakarta is complicated by Yudhoyono’s 2012 law granting special autonomy to Yogyakarta, which gave the sultanate power to regulate land and spatial planning.

This jumble of traditional, colonial and modern law has had a direct impact on the Kulon Progo farmers.

Corporate registration data from the ministry of law show that 70% of JMI’s shares are held by Rockcheck Steel Group, a company based in Tianjin, China. Rockcheck bought the shares from the Rajawali conglomerate, controlled by Indonesian tycoon Peter Sondakh, in 2019.

In 2015, Hamengkubuwono X signed a royal edict confirming the Singapore-educated princess as his presumptive heir, breaking with centuries of tradition by conferring the Mangkubumi royal title — previously reserved for a male heir — on his eldest daughter.

A skilled classical dancer, the princess is a versatile politician, juggling roles as head of the Yogyakarta chamber of commerce with several wildlife conservation initiatives.

Our reporting team approached the princess for comment on the iron sand project.

“I don’t know, I don’t know — I’m not up date,” she said at a fast-breaking event during Ramadan, adding in Javanese that she left the management of the company last year.

Farmers along this stretch of coast say they fear the beds of chili, eggplant and melon that paid for school uniforms and motorcycles face eradication.

“From agriculture alone we already have prosperity,” said Tukijo, who lives in Karangsewu village. “When this is mined a lot of people will be harmed.”

Today, Tukijo and and his wife, Suratinem, own a Yamaha NMAX motorcycle costing around 30 million rupiah ($2,100). Tukijo says he fears losing the livelihood that sustains his family, but knows the risks smallholder farmers caught up in land conflicts can face.

In 2010, Tukijo was bundled into a police car and whisked to a police station after he detained seven JMI workers who had allegedly broken an agreement not to enter Karangsewu village.

“After that I didn’t go home,” he said. “I was imprisoned for three years.”

Many of the Kulon Progo families have struggled to effectively fight their corner because, like millions of Indonesians, they lack formal land deeds, despite having tilled these fields for generations.

In 2006, producers established the Kulon Progo farmers’ association to advocate against plans to mine the area. A year later the farmers began demonstrating noisily at the local government and parliament building, even targeting Yogyakarta’s renowned Gadjah Mada University owing to its forestry school’s involvement in assessing the environmental impact of the project.

The farmers’ campaign won some local political support, but then-energy and minerals minister Purnomo Yusgiantoro signed the contract of work for JMI to develop the site on Nov. 4, 2008.

“The legal position of the [contract of work] is more legally binding than anything else,” said Syahrul Fitra, a Greenpeace researcher.

Nearby infrastructure development has also impacted both the Kulon Progo farmers and JMI, which has had to move its planned smelter 3 km (1.9 mi) owing to the construction of Yogyakarta’s new international airport, which has also sparked farmers’ protests.

Residents said compensation offers for compulsory purchase of land have in some cases been derisory and inconsistent. Two farmers with near-identical plots measuring 55 and 56 square meters (592 and 603 square feet) on the concession site received compensation valuations of 127 million rupiah and 941 million rupiah ($8,900 and $66,600), respectively.

The Yogyakarta office of Indonesia’s Legal Aid Institute has filed lawsuits on behalf of affected farmers. Lawyer Julian Duwi Prasetia told a district court in April that the valuation in one case “doesn’t make sense.”

At the demonstration in April, farmers held up banners reading “You Are Entering an Anti-Mining Zone” and “Sand Iron = Dead Farmers.”

“Today, we are here to show everyone, all the institutions who want to beat us down and drive us out, that we are here to stay,” said Widodo from the farmers’ association.

“I’m very busy. My position is also in Jakarta and continues to be WFH [work from home] because of the COVID conditions,” he said via text message in June.

Asked whether JMI would begin operations in 2022, Bobi said only “we’ll see.”

At the April demonstration on the main road, about an hour’s drive from the sultan’s palace in Yogyakarta, the Kulon Progo farmers — Dwi and Widodo among them — were less equivocal.

“For us,” Widodo said, “it comes down to farming or dying.”