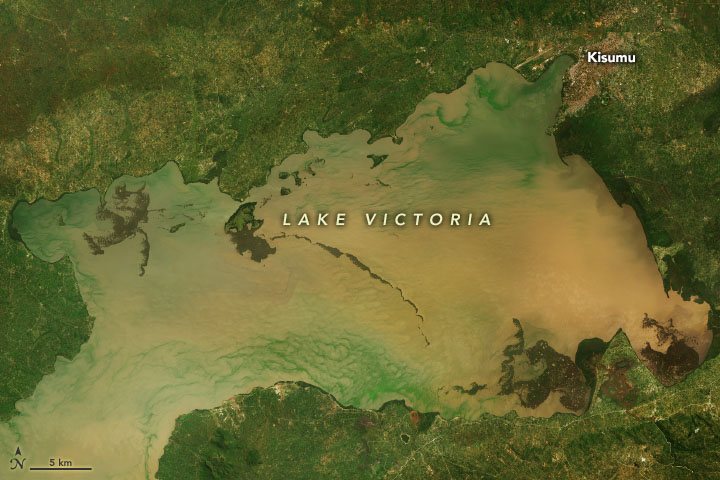 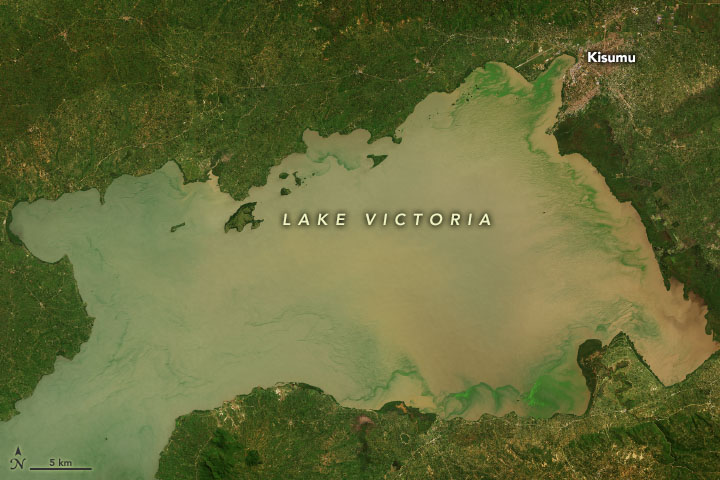 The pair of natural-color satellite images above offers a view of the changing conditions in Winam Gulf, a shallow northeastern extension of Lake Victoria in Kenya. The Operational Land Imager (OLI) on Landsat 8 acquired the first image on May 8, 2013, when water levels were significantly lower. The same sensor acquired the second image on May 27, 2021, when water levels were near record height. Notice how the water area has expanded in the 2021 image. Many of the green patches within the lake are vegetation. Suspended sediment makes some parts of the lake appear brown.

Radar altimetry data indicate that Lake Victoria water levels reached 1137.29 meters (3731.27 feet) above mean sea level on May 19, 2021, a high for satellite data records that date to 1992. The line chart above is based on data collected by the TOPEX/Poseidon and Jason series of satellites and shows how water heights have varied compared to reference measurements taken during the Jason-2 mission. During the peak height, water levels were 2.18 meters (7.15 feet) higher than this baseline. These observations and analyses were recorded by the Global Reservoir and Lake Monitor (G-REALM), a project sponsored by NASA and the U.S. Foreign Agricultural Service. FAS uses such water level measurements to assess irrigation potential and long-term drought conditions around the globe.

The high water at Lake Victoria in 2021 follows similar flooding in 2020. Last year, “backflow” from the shallow lake spilled into surrounding fishing and farming communities. The 2020 floods displaced hundreds of thousands of people and disrupted transportation, drinking water, sanitation, and power systems, according to news reports.

Lake Victoria’s water levels are partially regulated by dams at Jinja, Uganda, but the lake’s size is also highly sensitive to how much rain falls in East Africa particularly how much falls directly over the large lake during nighttime thunderstorms. After the expansion of Nalubaale dam and a drought in the mid-2000s drew water levels down to unusually low levels, many communities moved homes and infrastructure closer to the shore. With steadily rising water levels since 2007—and the especially sharp increase in 2020—many communities are now vulnerable to floods.

Resource managers have been working to manage the water levels. “The hydroelectric power dams in Jinja were opened in March 2021 to reduce the high lake water, and you can even see a temporary drop in the G-REALM data around then,” said Lydia Olaka, an environmental geologist at the University of Nairobi.

Human factors and land use choices influence how readily lakeside ecosystems can absorb excess water. The replacement of natural ecosystems with impervious surfaces—buildings and roads—reduces the moisture that soils can absorb. The removal of forest cover and wetlands also exacerbates flooding.

“Adopting the right engineering solutions can help ease flooding, but the public should also be aware that they play a role as well,” added Curtin University environmental scientist Joseph Awange. “Clearing vegetation and environmental degradation accelerates erosion and encourages silt buildup, while measures such as tree planting and damming of incoming rivers can make areas more resilient.”