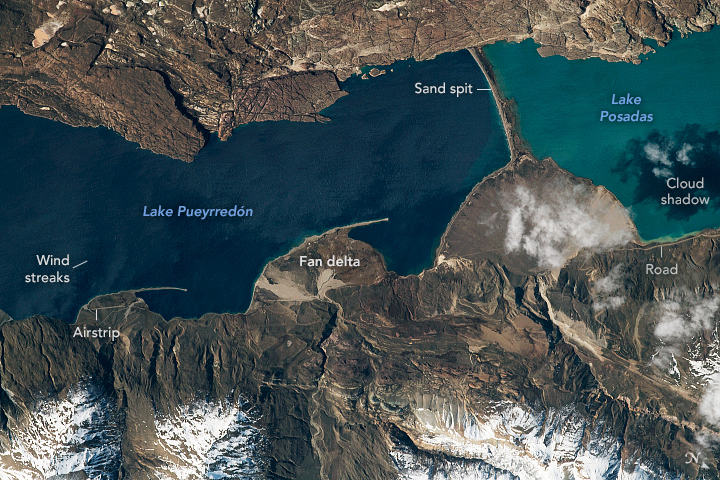 An astronaut onboard the International Space Station shot this photograph of Lake Pueyrredón and Lake Posadas in the Patagonia region of southern Argentina. Snow-covered foothills of the Andes Mountains appear along the lower margin. Streaks on the lake surface are produced by the strong winds that are very common in the region. The dark shadow of a cloud falls on the surface of Lake Posadas. Though the permanent population is small, tourism brings many people to Patagonia’s lake region; the small airstrip and lakeside road aid with arrivals.

Rivers from the local hills have dumped sediment on the shores of the lakes to form small deltas. Three are prominent on the shore of Lake Pueyrredón. (To the west in Chile, Lake Pueyrredón is known as Lake Cochrane.) Very strong and persistent winds have generated waves and currents powerful enough to erode sand from the toes of the fan-deltas, creating long, thin sand spits pointing down-current.

The biggest delta is connected to the opposite shore by a sand bar 3.5 kilometers (2.2 miles) long; it actually may be an ancient moraine. This sand bar cut off the eastern end of Lake Pueyrredón to form the smaller Lake Posadas. Posadas is lighter in color because of the light-toned sediment flowing into it from the incoming river.

Land surfaces here have been dynamic in the past one or two million years. Geologists now know that ice sheets that formed along the nearby Andes Mountains have expanded repeatedly, each time covering almost the entire area shown in the photo. Other astronaut photos such as this one show the Northern Patagonian ice sheet that affected Lake Pueyrredón.

Astronaut photograph ISS063-E-88524 was acquired on September 15, 2020, with a Nikon D5 digital camera using a focal length of 800 millimeters. It is provided by the ISS Crew Earth Observations Facility and the Earth Science and Remote Sensing Unit, Johnson Space Center. The image was taken by a member of the Expedition 63 crew. The image has been cropped and enhanced to improve contrast, and lens artifacts have been removed. The International Space Station Program supports the laboratory as part of the ISS National Lab to help astronauts take pictures of Earth that will be of the greatest value to scientists and the public, and to make those images freely available on the Internet. Additional images taken by astronauts and cosmonauts can be viewed at the NASA/JSC Gateway to Astronaut Photography of Earth. Caption by Justin Wilkinson, Texas State University, JETS Contract at NASA-JSC.