Looking Up and Out from Sunspot 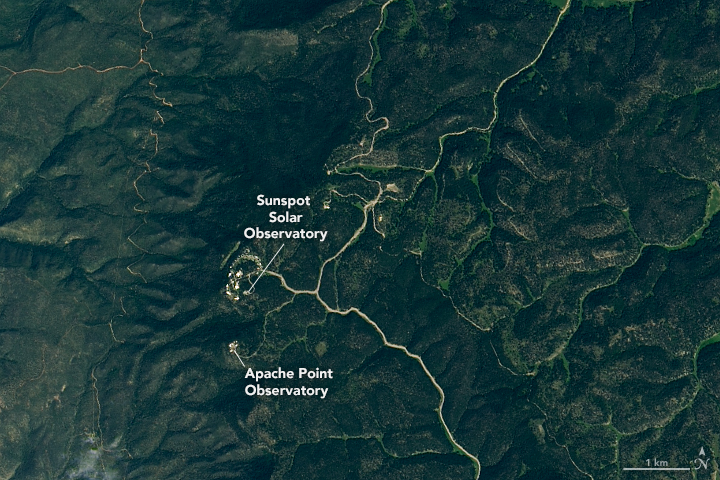 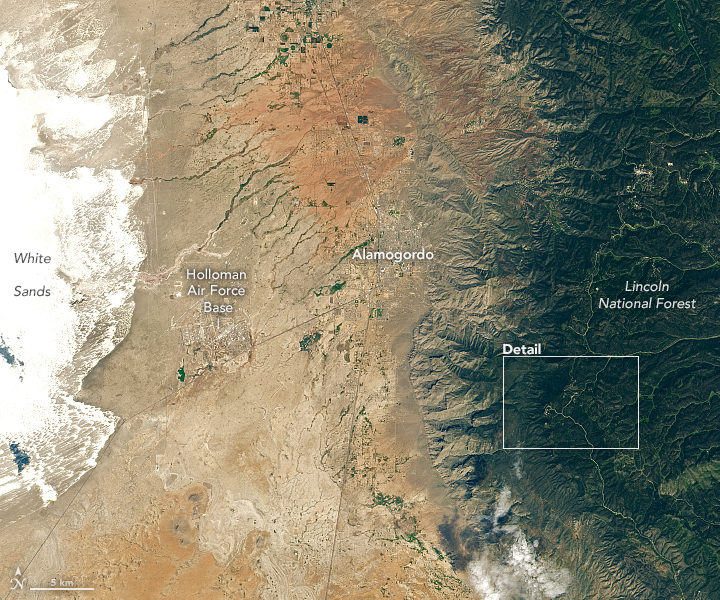 Both the observatories and the dunes are visible in the natural-color image above, which was captured by the Operational Land Imager (OLI) on Landsat 8 on September 16, 2021. While this part of New Mexico is generally dry, the observatories are situated within a rugged forested area kept green by high-altitude precipitation and a network of perched aquifers that keep water above the regional water table. The only road into Sunspot is New Mexico State Road 6563, named for H-alpha, a deep-red spectral line with a wavelength of 656.28 nanometers. That wavelength is useful for observing key features in the Sun’s atmosphere.

The Sunspot Solar Observatory houses the Dunn Solar Telescope, a high-resolution, vertical-axis telescope used to study solar cycles, sunspots, and flares. A heliostat at the top of a 136-foot (41-meter) concrete tower directs sunlight downward to a primary mirror that is deep underground.

The Apache Point Observatory maintains several telescopes used for astrophysics research. Among them is a 2.5-meter optical telescope used as part of the Sloan Digital Survey, an ambitious sky-mapping project that has produced the largest three-dimensional map of the universe ever made. The map includes about two million galaxies and quasars that cover 11 billion years of cosmic time.

Apache Point is also home to a 3.5-meter telescope with a lunar ranging system. Astronomers use pulses from lasers at the observatory and a retroreflector on the Moon (left there by Apollo astronauts) to measure the distance between the Earth and Moon to within a few millimeters. The system is used to study the Moon’s interior structure, general relativity, gravity, and the nature of spacetime.

In 2021, the ranging station at Apache Point Observatory joined NASA’s Space Geodesy Project, an effort to build celestial and terrestrial reference frames, systems that assign coordinates to locations on Earth and in space to provide a consistent framework to relate measurements to each other.

Accurate reference frames are critical for Earth-observing satellites to accurately map subtle changes to Earth’s surface, to maintain global positioning systems (GPS), and to aid the navigation of satellites.