Indian Ocean yellowfin tuna (Thunnus albacares), one of the most profitable fisheries in the world, is just a few years away from collapse. A meeting that began June 7 will be crucial in deciding its fate.

Exploitative industrial fishing practiced over decades by the EU, and increasingly important artisanal fisheries in coastal states have decimated the population. There is consensus among members of the Indian Ocean Tuna Commission (IOTC), the intergovernmental body charged with managing the stock, that overfishing must stop.

But sharp divisions persist on how steep the cuts should be and who should be making them. It has pitted a group of distant-water fishing nations, led by the EU, which hauls in the largest share of the fish, backed by South Korea and Japan, against Indian Ocean states like the Maldives, Kenya and South Africa.

A rebuilding plan introduced by the IOTC in 2016 did not stop overfishing. Total catches actually increased between 2017 and 2019. The Maldives’ proposal for an update submitted in May received the backing of environmental NGOs like U.S.-based WWF and the U.K.-headquartered Blue Marine Foundation this month. The EU has also put forth a proposal in the run-up to the weeklong virtual meeting.

“We recognize that the Maldivian proposal is more ambitious and equitable than the proposal tabled by the E.U.,” a dozen NGOs said in a statement, adding that “further catch reductions will be required to achieve stock rebuilding within two generations.”

In 2019, the total yellowfin tuna catch stood at 427,240 tons, higher than the 403,000 tons that the IOTC’s scientific committee had prescribed. There are different estimates for how much the proposed plans will lower the total catch. Most suggest that the Maldives’ plan will achieve greater reductions than the EU’s.

The Blue Marine Foundation and International Pole and Line Foundation (IPNLF), a U.K.-based organization representing processors, retailers and distributors of tuna, also estimated that the EU’s proposed plan would lead to a total catch that is “significantly higher” than for the Maldives.

Even that, experts say, may not go far enough to save the species. WWF and others urged the IOTC parties to cap the catch a between 339,000 and 350,000 tons and described the Maldives’ plan as the “best starting point.”

The two plans on the table propose different mechanisms for effecting reductions. The EU is calling for cuts by gear type. The Maldives wants reductions to be imposed on IOTC members, with differential cuts for developing countries, small island developing states and developed nations. Under this plan, the cuts will be gear-neutral, so fishing nations will be free to distribute their share among different gear types. 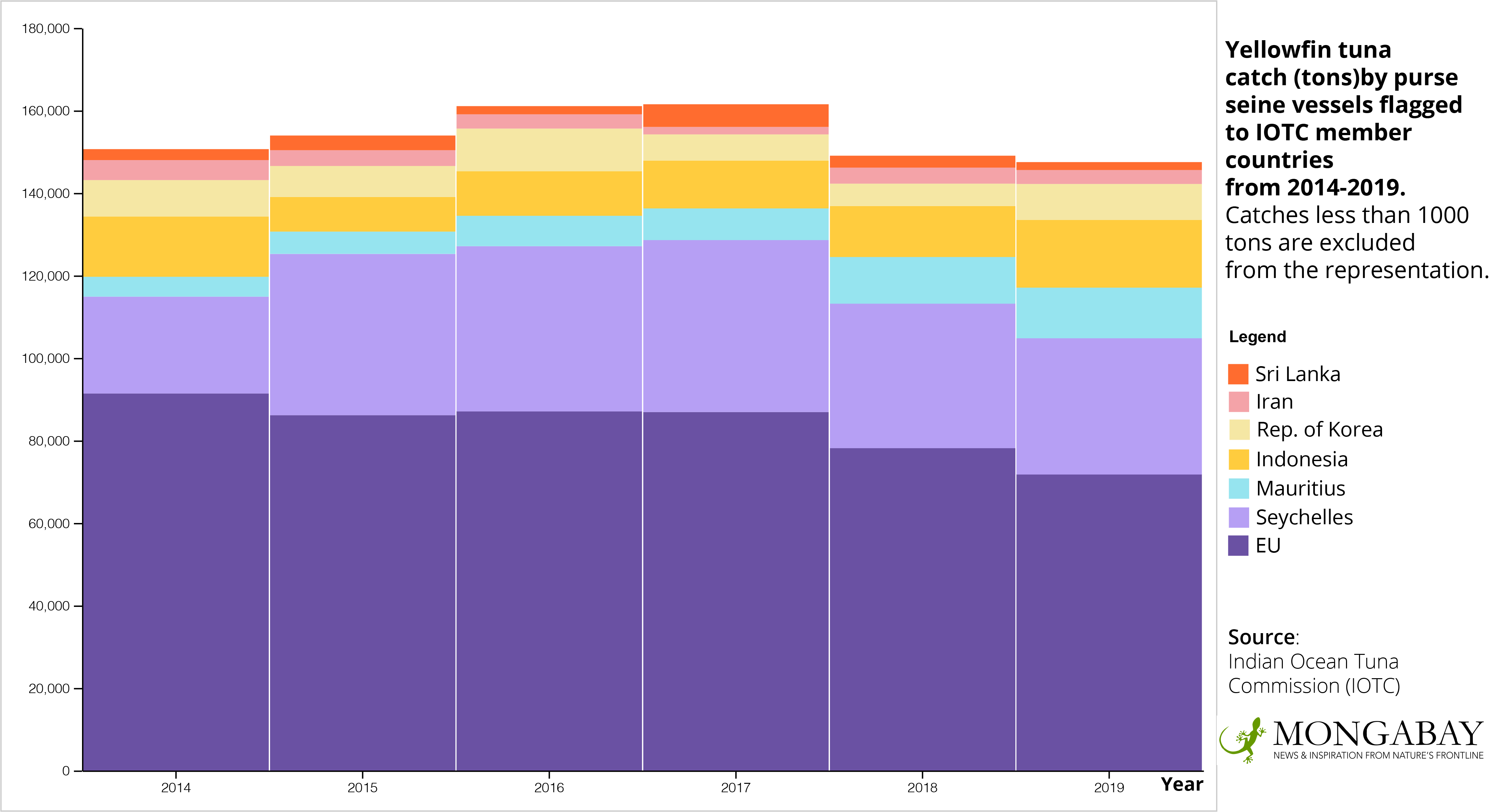 EU tuna fisheries pull in a third of all yellowfin tuna from the Indian Ocean. These EU fisheries operate through vessels flagged to France and Spain and through ships flagged to small coastal states like Seychelles and Mauritius that are ultimately controlled by EU companies. The purse seine fishery is the most consolidated and profitable in terms of end value, according to an analysis by Pew.

However, the catches of other fleets, though significantly smaller than those of the EU, are growing quickly. There are 30 full members of the IOTC, of which 24 are Indian Ocean coastal states. Of the Indian Ocean countries, barring Australia and small island nations, all are developing countries, including Madagascar and Yemen, two of the world’s poorest countries. Taken together, yellowfin catches by a dozen or so Indian Ocean countries form a substantial chunk of the total catch. Most of these countries’ catches are not subjected to regulations under the current rebuilding plan.

There is broad agreement that regulations need to be expanded to fleets and gear types that are currently exempt, as their shares of the total yellowfin catch are rising. Purse seine, gillnet, longline and pole and line are the major gear types used in tuna fishing in the Indian Ocean.

Going gear-neutral has its pitfalls, especially if other measures are not in place.

A recent report by the Global Tuna Alliance, which represents tuna retailers, found that from 2015 to 2019, more than a third of the yellowfin tuna caught were juveniles, defined as measuring less than 76 centimeters (30 inches). Catching juveniles is detrimental to fish populations because these fish have not reproduced.

Juveniles form the largest portion of the catch in pole and line fisheries. But since the share of this gear in total yellowfin catch is low, this fishery is responsible for removing 11% of yellowfin juveniles caught in the Indian Ocean. Gillnets trapped about 35% of juveniles caught in this period. Gillnets are additionally known to have high rates of bycatch, the capture of non-targeted species.

Purse seiners haul in about half of all the juveniles, the report estimated. Experts blame the use of fish aggregating devices (FADs) that attract juveniles by purse seiners for the high number. Kenya is proposing a reduction in the number of drifting FADs (dFADs), considered by environmentalists to be the most harmful, not just in terms of juvenile capture but also bycatch and plastic pollution. Kenya’s proposal is to halve the allowed FADs from 300 to 150 per vessel.

FADs are used extensively by EU-controlled purse seiners, and the bloc has struggled to bring its fishing industry on board with plans to move away from them quickly.

A special session held in March to come up with more effective management measures ended in a stalemate. Some accuse the EU of using its influence in Indian Ocean tuna negotiations to push corporate interests at the expense of sustainability and of adopting a “neo-colonialist” attitude. The EU denies these charges.

“The E.U. is strongly committed to find a solution in the IOTC to rebuild the stock and ensure sustainable fishery,” the EU delegation to Mauritius and Seychelles said in an emailed response to Mongabay’s questions. “We are introducing an ambitious proposal to cut down yellowfin tuna catches and rebuild the stock to a sustainable level.”

“Fisheries are being grossly mismanaged by weak institutions and political decisions — including most recently at the Indian Ocean Tuna Commission, where the influence of European industry resulted in the meeting’s failure to agree on any measures to tackle overfishing,” Greenpeace U.K. said in a statement regarding the March negotiations.

Conservationists have also argued that fisheries management organizations like the IOTC put the interests of governments and corporations over the health of marine life. Rebuilding the stock will only be on the table after overfishing is brought under control, and at the IOTC, that would be a hard-won battle.

Some fear that the fundamentally different design of the proposals and underlying rift over who is responsible for the crisis makes a deal difficult. François Chartier, an ocean campaigner at Greenpeace France, told Mongabay that negotiations between the EU and the Maldives will only lead to a dilution of ambition. The Blue Marine Foundation and the IPNLF in a separate statement asked the EU to consider withdrawing its proposal and support the Maldives’ proposal. Such a move by the EU would most certainly increase the chances of success at the meeting that closes on June 11.

Malavika Vyawahare is a staff writer for Mongabay. Find her on Twitter: @MalavikaVy

(Correction: An earlier version of the article misidentified the NGOs urging the E.U. to withdraw its proposal in the last paragraph. WWF did not issue the statement. It was issued by the Blue Marine Foundation and the IPNLF separately.)