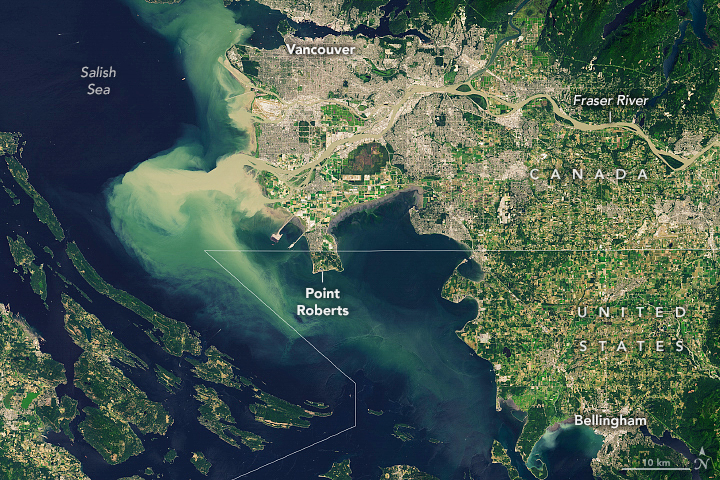 Point Roberts, Washington, is like many small coastal towns in the Pacific Northwest, with access to epic places to fish, hike on the beach, and watch whales. But unlike other coastal towns, getting to Point Roberts is a bit more complicated. To drive there from mainland Washington, you must cross an international border twice.

Point Roberts is what’s known as an exclave—part of a territory that is geographically separated from its main part by another territory. In this case, the 5-square-miles (13-square-kilometers) of U.S. territory that constitutes Point Roberts is separated from the rest of Washington by British Columbia, Canada. This geopolitical curiosity is the focus of these images acquired on July 29, 2020, by the Operational Land Imager (OLI) on Landsat 8.

The wide view shows Point Roberts dangling below the 49th parallel—the line of latitude that was established in 1846 as the political boundary between the northwestern United States and Canada. Point Roberts is further isolated by the Strait of Georgia to the west and south and Boundary Bay to the east. The second image shows a detailed view of Tsawwassen peninsula and Point Roberts. 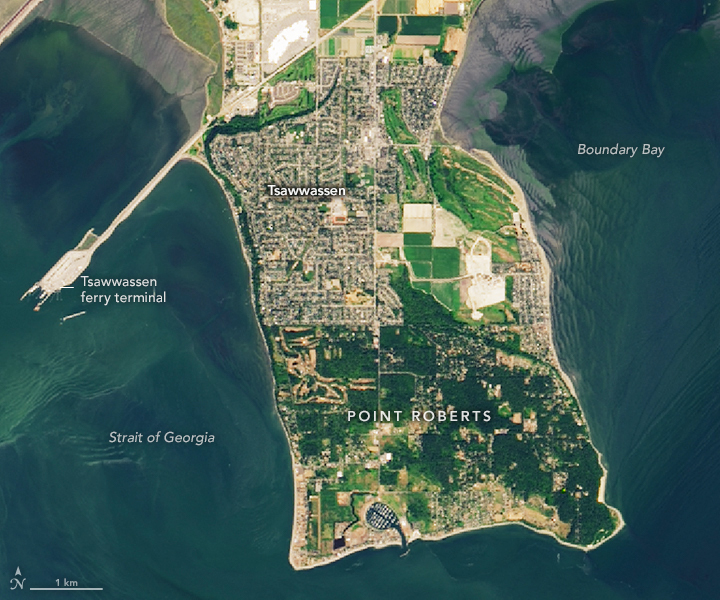 Political boundaries can sometimes affect built landscapes in ways that are visible from space. In this case, the green expanse of the Bald Eagle Golf Club abruptly ends south of the border; just north of the border in Canada, the geometric patterns of the suburban community of Tsawwassen take shape.

Point Roberts is a popular vacation spot for Canadians, which helps drive the town’s economy. Since the closing of the U.S.-Canada border in mid-March 2020 due to COVID-19, news reports have likened it to a ghost town in the making. The closure put a halt to routine border crossings to mainland Washington—just 25 miles away—temporarily ending previously routine trips by the town’s residents to schools and medical care.

The ferry terminal visible in these images connects two Canadian points—the town of Tsawwassen and Vancouver Island. For now, emergency ferry service is available as necessary from the Point Roberts marina to Bellingham, Washington. At the time of this story, the border was expected to remain closed until at least June 21, 2021.

Some natural features are unaffected by political borders. Notice, for example, the striking plume streaming from the mouth of the Fraser, the longest river in British Columbia. The river carries about 20 million tons of silt each year, much of it into the Strait of Georgia. Moved around by winds, currents, and tides, the silt provides nutrients that fertilize the region’s waters and support its salmon populations, which in turn make Point Roberts a great place to view the local pods of orcas.