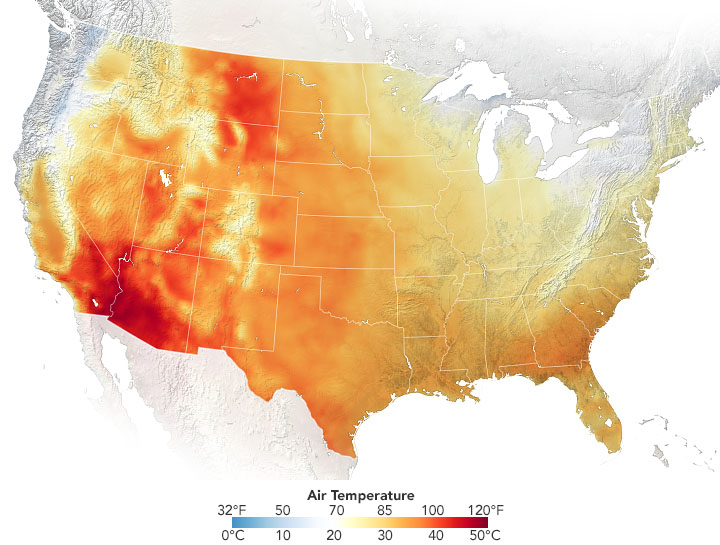 Extreme heat has descended on the southwestern United States this week, with several states enduring temperatures near and above record highs for June. As temperatures have surged, the region is also dealing with drought and scattered wildfires.

The map above shows air temperatures across the continental U.S. during the afternoon on June 15, 2021. The map was derived from the Goddard Earth Observing System (GEOS) model and depicts air temperatures at 2 meters (about 6.5 feet) above the ground. The darkest red areas are where the model shows temperatures around 49°C (120°F).

The GEOS model, like all weather and climate models, uses mathematical equations that represent physical processes (such as precipitation and cloud processes) to calculate what the atmosphere will do. Actual measurements of physical properties, like temperature, moisture, and winds, are routinely folded into the model to keep the simulation as close to observed reality as possible.

In Arizona, the high temperature in Phoenix (46°C/115°F) tied the record for June 15, falling short of the record-breaking 117°F forecasted for that day. According to news reports, forecasts were complicated by a blanket of smoke from wildfires burning in the state. In cloudless skies, airborne smoke generally leads to cooling below.

On June 15, smoke from the fires drifted westward and covered the western half of Arizona. The Telegraph and Mescal fires near Globe, Arizona, are currently the largest, having burned nearly 57,000 hectares (140,000 acres) and 29,000 hectares (72,000 acres), respectively, as of June 16. There are currently 33 large active fires in 10 states; more than half are burning in the Southwest and Great Basin regions.

The high pressure and extreme heat are expected to continue throughout the week, exacerbating already dry conditions across the U.S. West.