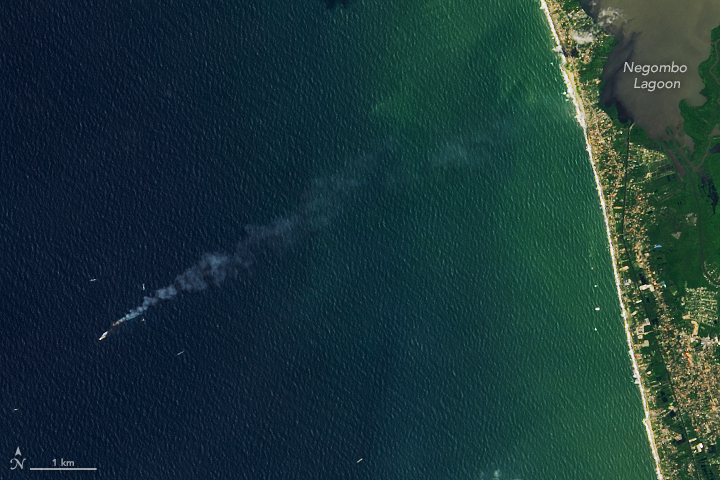 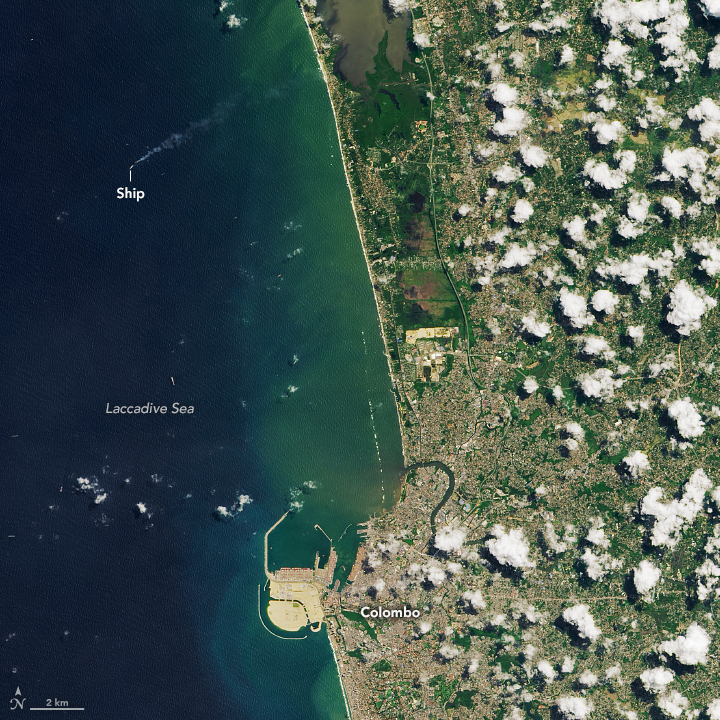 On June 1, 2021, the Operational Land Imager (OLI) on Landsat 8 acquired this natural-color image of smoke streaming from a stricken cargo ship along the coast of Sri Lanka.

According to news reports, the fire initially erupted in late May when the Singapore-bound vessel was anchored northwest of Colombo while waiting to enter the city’s port. It took crews about two weeks to extinguish the fire. Soon after, salvage experts attempted to move the ailing ship offshore into deeper water, but they had only towed it a short distance before the aft part of the ship sank.

The vessel carried more than 1,400 shipping containers, some of which have spilled. Large quantities of small plastic pellets known as nurdles have washed up on nearby beaches. There are also concerns about how spills of nitric acid, possibly oil, and other materials may affect marine ecosystems.

Though other U.S. and international agencies play more immediate roles in the response to disasters, NASA plays a role in providing observations and analysis. Over the past decade, NASA has actively built its capacity to share Earth observations that can improve the prediction of, preparation for, response to, and recovery from natural and technological disasters.

NASA and the U.S. Geological Survey often respond to calls for data and imagery from the International Charter for Space and Major Disasters, a worldwide collaboration among space agencies to provide free satellite data to those affected by natural disasters. In this case, the Asian Disaster Reduction Center activated the charter on behalf of Sri Lanka’s Disaster Management Center. Partner organizations have compiled a range of remote sensing information and data relevant to the disaster that you can see here.

In addition to the cargo ship fire, Sri Lanka has also recently faced serious floods and landslides due to intense monsoon rains. Participating organizations have compiled information about the flooding here.