Sizing Up a Tabular Iceberg 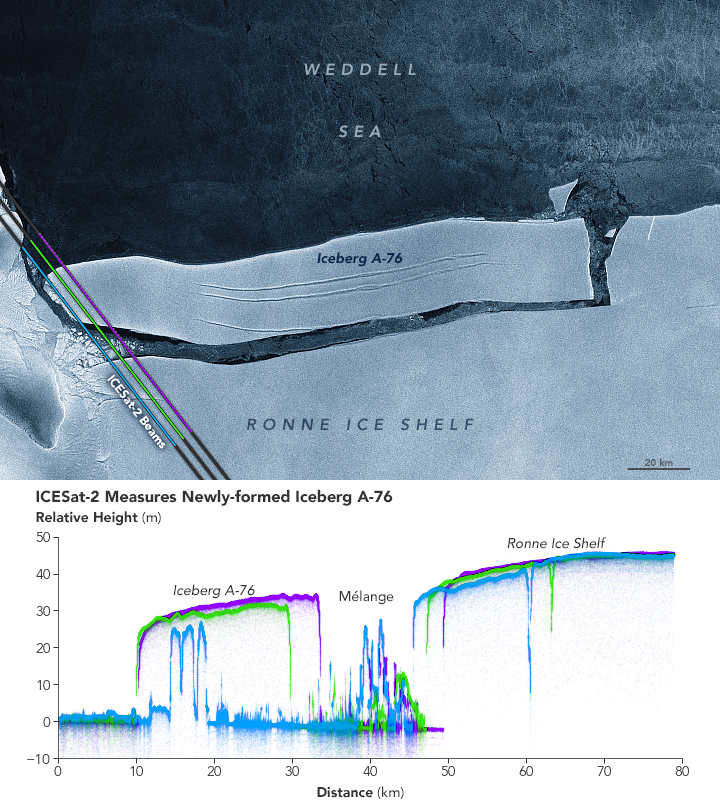 In terms of size, only one iceberg can reign supreme at a time—a position recently held by Iceberg A-76 in the Weddell Sea. When the berg calved from Antarctica’s Ronne Ice Shelf in May 2021, it became the largest iceberg floating anywhere in the world.

Antarctica’s ice shelves are famous for cutting loose some mammoth icebergs. The largest are usually tabular icebergs, named for their table-like shape with steep sides and large, flat tops. Iceberg A-76 represents a classic tabular iceberg, but as the elevation profile above shows, even this picture-perfect berg is not perfectly flat.

“Ice is a somewhat strange material,” said Ted Scambos, a research glaciologist at the University of Colorado. “We’re not used to its particular combination of strength, brittleness, and bendy-ness.”

The profile above was acquired with the Advanced Topographic Laser Altimeter System (ATLAS) on NASA’s Ice, Cloud, and land Elevation Satellite 2 (ICESat-2). ATLAS is a photon-counting lidar that sends pulses of laser light toward Earth and precisely times each photon’s round-trip journey as it bounces off a surface and returns to the sensor. From this information scientists can derive the height of the surface hit by the photon.

The image shows the elevation data acquired by three different ATLAS laser beams as the satellite passed over the new iceberg on May 17, 2021. The laser light is actually bright green, but the beams are represented here in blue, green, and purple to better differentiate the elevation data derived from each one. The data have been overlaid on an image of the iceberg acquired with the synthetic aperture radar (SAR) on the Copernicus Sentinel-1A satellite (operated by the European Space Agency). The radar image was acquired on May 18, 2021, just 20 hours after ICESat-2 passed over.

The beams first pass over relatively flat open water before reaching the leading edge of the iceberg, where the elevation profiles begin to differ. Notice the jagged texture of the ice where the blue beam clips the berg’s western edge. The irregular shape was created when the berg was still attached to the ice shelf and flowing through a zone known as a shear margin. As “fast” flowing ice pushed past the rocky ice-covered peninsula, powerful stresses caused the ice to crumple.

The green and purple beams reveal the more typical profile of a tabular iceberg. Notice that the seaward edge appears lower. For 21 years—since the last time an iceberg calved from the Ronne Ice Shelf—melting has taken a toll on the exposed front edge. Its underside has likely been eroded by seawater carving it from below it during thousands of tidal cycles.

By comparison, the iceberg’s fresh interior edge is higher, standing about 35 meters (100 feet) above sea level. That means the berg would be about 280 meters thick, including most of the iceberg that exists below the water line and out of sight.

There are other intricacies visible as well. The interior edge shows a classic steep face, with a series of crests and troughs on the iceberg’s surface as you move away from the edge. Models have shown that this is how the ice of an iceberg like A-76 should respond after breaking from an ice shelf.

“At the very first instant and a few days after a sharp break, the fresh edge has one shape based on the ‘rigid’ response of the ice,” Scambos said. “But the ice slowly responds to the stress and bends over the course of days to a slightly different shape.”

The profile also exposes mélange—a mixture of broken ice floating on the sea surface—before rising steeply at the newly exposed face of the Ronne Ice Shelf. The blue beam dips sharply (and the green beam to a lesser extent) at the location of a rift on the ice shelf along the shear margin—in a similar location to a rift that helped spawn Iceberg A-76.

According to Christopher Shuman, a University of Maryland, Baltimore County, glaciologist based at NASA’s Goddard Space Flight Center: “The rest of the Ronne front now bears watching to see when it will respond to the calving of A-76.”