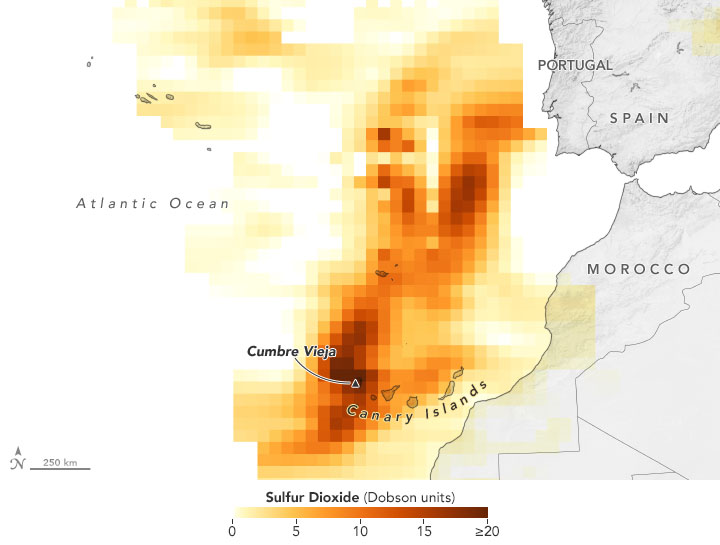 More than a month after Cumbre Vieja began erupting, the volcano in the Canary Islands shows no signs of calming. In the past week, increasingly intense earthquakes, lava fountains, and emissions of ash and volcanic gases have rocked La Palma.

One new breakout lava flow has been advancing through a developed area on the island’s western flank, consuming buildings and fields in its path. Nearly 2,000 homes and hundreds of hectares of farmland have been destroyed by lava flows since the eruption began in September 2021.

Among the substances pouring from the volcano is sulfur dioxide (SO2), a pungent gas that reacts with oxygen and moisture to form a gray volcanic haze called vog. Vog is made up of sulfuric acid and sulfate aerosols.

On October 18, 2021, NASA’s Aqua satellite acquired imagery showing faint visible traces of vog streaming towards Europe. A few minutes later, the Ozone Monitoring Instrument (OMI) on NASA’s Aura satellite took measurements of the SO2 in the plume. The map above shows where Aura detected SO2 in the planetary boundary layer, the lowest part of the atmosphere. The sensor’s spatial resolution of 13 square kilometers (5 square miles) gives the data a blocky quality.

Satellite observations indicate Cumbre Vieja has released about 0.5 teragrams (Tg) of sulfur dioxide since the eruption began, enough to make it one of the top 50 SO2 emissions events since satellites began measuring volcanic eruptions in 1978. However, Cumbre Vieja is still far behind other recent effusive eruptions that persisted for months, such as Kilauea (Hawaii) in 2018 and Holuhraun (Iceland) in 2014.

Since the Cumbre Vieja eruption is only modestly explosive (a 2 out of 8 on the Volcanic Explosivity Index), the sulfur dioxide has remained relatively low in the atmosphere and well below the stratosphere. “I don’t expect any lasting global or regional climate impacts. The sulfur dioxide emissions aren’t high enough,” said Carn. “However, the SO2 emissions might have some localized environmental impacts on La Palma and other Canary islands, such as damage to vegetation due to acid deposition and problems with water quality.”