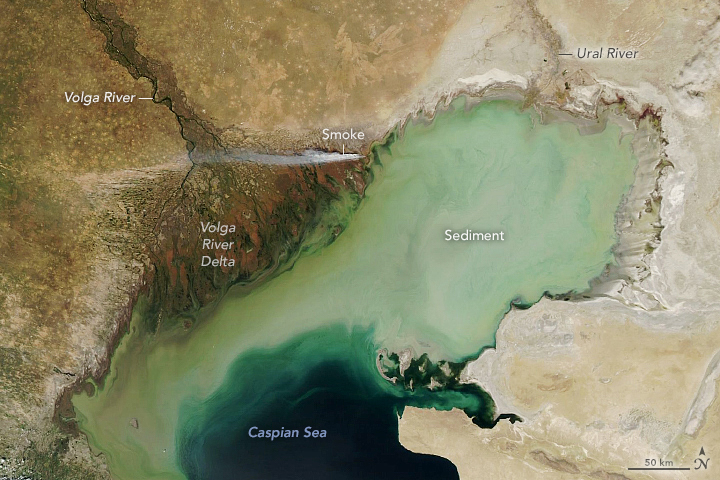 In many parts of the world, sea levels are rising due to global warming. But scientists note that warming and increased evaporation are likely to play out differently for inland seas and lakes.

In the case of the Caspian Sea (technically a lake), scientists anticipate rapid declines in water levels in the coming decades and centuries. Radar altimetry data collected by multiple satellites and compiled by NASA’s Global Water Monitor indicate that the Caspian’s water levels have already been dropping since the mid-1990s.

By one estimate, Caspian water levels could drop by 9 to 18 meters (30 to 59 feet) by the end of the 21st century, enough that it would lose about a quarter of its area and uncover about 93,000 square kilometers (36,000 square miles) of dry land. That is an area about as large as Portugal.

Much of the new land would come from the northern Caspian, a shallow zone that holds just 1 percent of the lake’s volume and has an average depth of 5 to 6 meters (16 to 19 feet). For comparison, the deepest parts of the lake stretch down more than 1,000 meters below sea level. The Moderate Resolution Imaging Spectroradiometer (MODIS) on NASA’s Aqua satellite acquired this natural-color image of the northern Caspian on July 17, 2021. Suspended sediment delivered by the inflowing Volga and Ural rivers had discolored the waters in the northern part of the lake, while winds may have also stirred up sediment.

Losing the northern part of the Caspian could have major ecological consequences. Its shallow waters teem with mollusks, crustaceans, fish, and birds. Seals raise their pups on winter ice that usually only forms in this part of the lake. “Current protected areas in the Caspian Sea, most of which cover coastal ecosystems including highly coveted wetlands such as the Volga Delta and other Ramsar sites (wetlands of international importance named after the Caspian coastal city of Ramsar, Iran) will be transformed beyond recognition,” a group of European scientists wrote in Communications Earth & Environment.