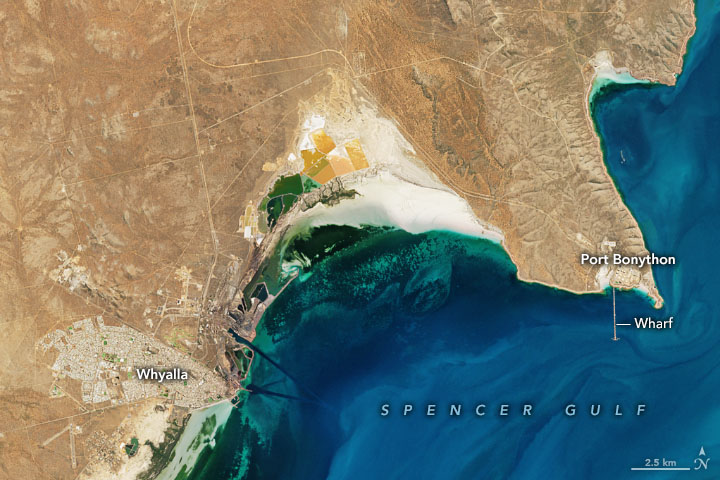 Each winter from May to August, thousands of Australian giant cuttlefish (Sepia apama) make their way to False Bay, northwest of Adelaide along the coast of South Australia. In this bay at the head of Spencer Gulf, the chilly water and rocky seafloor provide prime conditions for the largest known mass spawning event, or “aggregation,” of cuttlefish in the world.

Growing to nearly a meter long, the Australian giant cuttlefish is the largest of these unique cephalopods. With special skin cells called chromatophores, cuttlefish are masters of disguise—capable of instantly changing the color, pattern, and even texture of their skin. They do this to camouflage themselves from predators, attract mates, or mesmerize prey.

On September 8, 2021, the Operational Land Imager (OLI) on the Landsat 8 satellite captured this natural-color image of False Bay on Eyre Peninsula. The light-colored swirls in the water are caused by sediment brought to the surface when strong winds churn shallow parts of the gulf. These waters draw both scuba divers (to the famed Stony Point cuttlefish dive site, west of the wharf) and commercial fishers—one group hoping to catch a glimpse of the ornate cephalopods and the other hoping to catch them.

In 2013, after the cuttlefish population had declined by 90 percent over the previous decade, a fishing ban was implemented across the northern reaches of Spencer Gulf. In 2020, that exclusion zone was scaled back, mainly to False Bay, after reports that the population had rebounded from fewer than 20,000 cuttlefish to about 250,000. The current exclusion zone stretches across False Bay from the Point Lowly Lighthouse in the east, across the tip of the Port Bonython wharf, to the jetty in the port town of Whyalla.

Since the early 1900s, Whyalla has been a center of iron ore mining, steel production, and ship building. Today, efforts to balance the economic interests of the region with the health and sustainability of the cuttlefish population continue. To promote Whyalla “as a year-round destination valued for its environment, recreation and lifestyle experiences,” the city is now developing a Cuttlefish Coast Sanctuary Tourism & Conservation Project, which is expected to be completed in 2023.