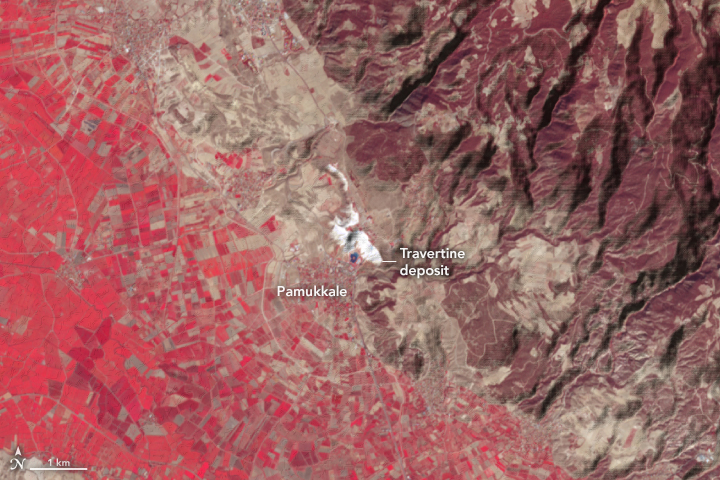 The hot springs and thermal pools at Pamukkale, Turkey, have been a spiritual, cultural, and recreational destination for thousands of years. In the second century B.C., the ancient Greco-Roman city of Hierapolis was built atop the terraces of travertine, a type of rock that forms when calcium carbonate precipitates from hot water. At the nearby Cleopatra’s Pools, visitors can swim among broken columns that collapsed during the Laodikeia earthquake in early seventh century C.E. Hierapolis-Pamukkale was designated a UNESCO World Heritage site in 1988.

The world’s largest deposit of such rocks lies in western Anatolia, Turkey, where Earth’s crust is pulling apart. This extension of the crust creates many faults and fissures, along with volcanic, seismic, and geothermal activity.

One of the largest sections is the 6-kilometer-long Pamukkale plateau, on the northern margin of the Denizli Basin, where the rock averages 50 meters thick. The site features a spectacular array of white calcite terraces and rimstone pools cascading over 200-meter-high cliffs on the uplifted side of the Pamukkale fault. Named for the bright white rocks, Pamukkale translates as “cotton castle” or “cotton palace.”

The Pamukkale deposits, seen in white in the above image, cover 12 square kilometers (5 square miles). The image was acquired on October 9, 2021, by the Advanced Spaceborne Thermal Emission and Reflection Radiometer (ASTER) on NASA’s Terra satellite. The image was collected in the visible and near infrared (bands 3,2,1) in which vegetation appears red.

Water temperatures in these pools and springs range from 19 to 57 degrees Celsius (65 to 135 degrees Fahrenheit), although some can reach temperatures of 100 degrees Celsius or higher. The travertine forms when rainwater seeps down into the network of faults and fissures and is heated by magma deep underground. The hot water leaches calcium, magnesium and other minerals from the limestone bedrock. The saturated solution then percolates back to the surface, reemerging from springs at the surface where the minerals precipitate.

Travertine deposition has been occurring in the area for at least 600,000 years, since the Pleistocene epoch. However, much of the deposition at Pamukkale has occurred in the past 50,000 years. Research suggests the current hydrothermal and depositional system was established after the seventh-century Laodikeia earthquake.