In the 1970s, coral reefs in the Western Indian Ocean were relatively untouched by people. Today, these same reefs are at a tipping point with more than 69 million people living in the coastal zones of the region. Mounting pressures from climate change, overfishing, and pollution, have caused all reefs across the region to be at high risk of collapse — within merely decades.

Our study brought together researchers from more than 35 organizations over the last 2 years, published in the journal Nature Sustainability on 6 November 2021. We found that of the 11 subregions of the Western Indian Ocean, coral reefs in four subregions were ‘Critically Endangered’ and three were ‘Endangered’ due to anticipated climate change in the next 50 years. Four eco-regions were ‘Vulnerable’ to collapse, from overfishing impacts already experienced over the last 50 years. No reefs in the Western Indian Ocean were classed as not being in danger of collapse.

Let us repeat: No reefs in the Western Indian ocean are safe from collapse in the next 50 years.

Our study included Kenya, Tanzania, Mozambique and South Africa on the coast of East Africa, and the neighboring islands of Comoros, Madagascar, Reunion, Seychelles, and Mauritius. Our approach takes the data published in the global coral reef status update released on 5 October 2021, adds detail through incorporating finer resolution data available within the region, and interprets the patterns through an established approach for assessing the risk of collapse of ecosystems.

It’s called the Red List of Ecosystems and it was developed by the International Union for Conservation of Nature (IUCN), the world’s leading conservation organization. Much like the well-known Red List of Species that assesses how close species are to extinction, the Red List of Ecosystems sets an objective, data-driven standard to how close ecosystems are to collapse. It identifies three classes of danger: ‘Vulnerable’, ‘Endangered’, and ‘Critically Endangered’. Each of these classes represents a significant step away from ‘Non-threatened’ to a state of ‘Collapsed’, which is when an ecosystem ceases to exist.

Our results show that we are not doing enough to stem the decline in coral reefs, despite historical commitments to conservation from governments and partners. With new and emerging commitments by countries to the ‘blue economy’ — economies that are sustainable environmentally and inclusive of all people — a fundamental question is if we will do what is necessary to preserve the critical foundations needed to attain these – the health of marine and coastal ecosystems? 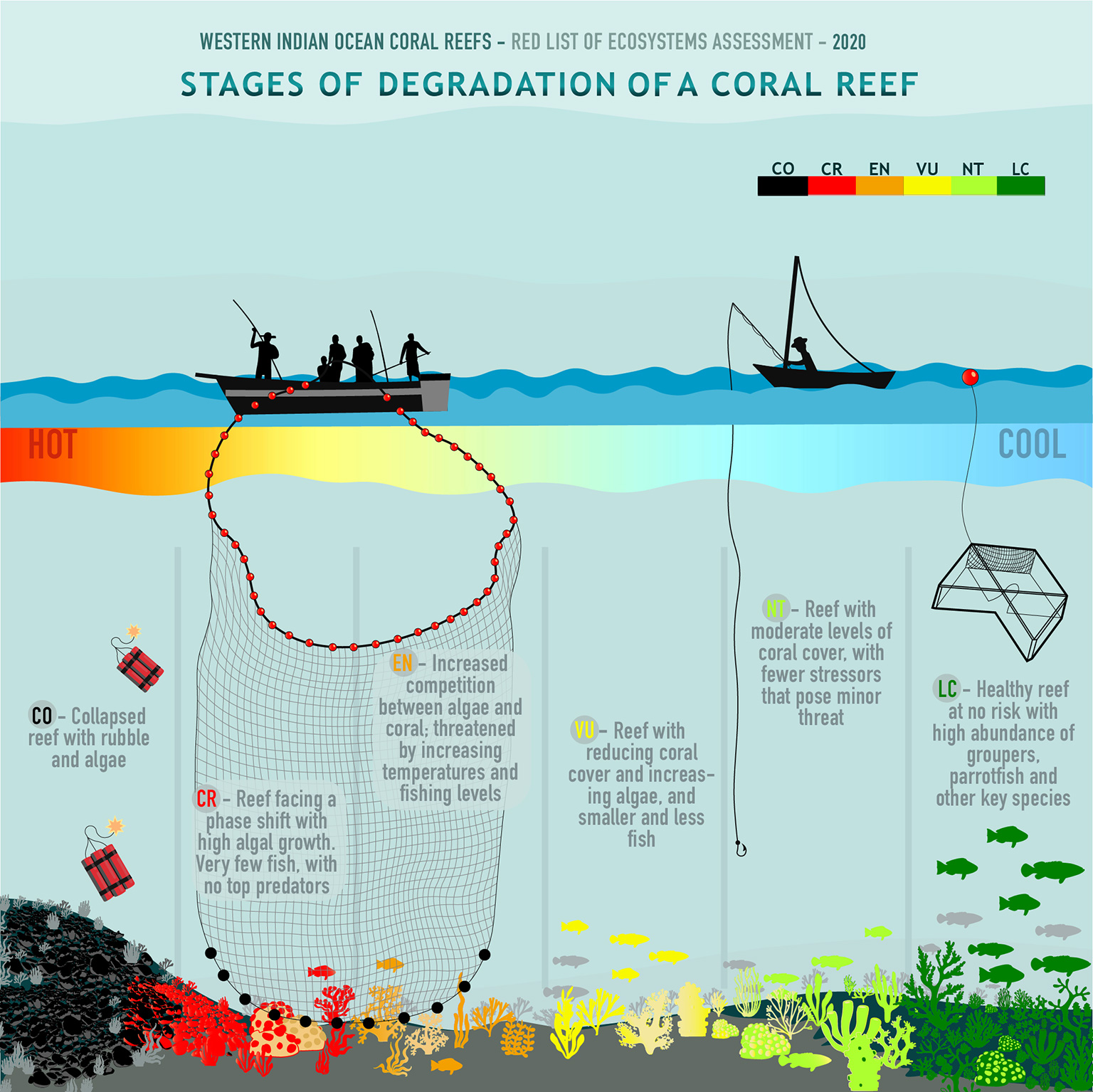 To save coral reefs of the Western Indian Ocean, we need to address both climate change and overfishing together because acting on one without the other will not stop the increasing pressure on our coral reefs.

On climate change, countries need to ensure global greenhouse gas emission reductions are deep enough to keep warming within the 1.5 degrees Celsius ‘safe limit’ for coral reefs. The climate COP 26 that ended on 14 November 2021 in Glasgow failed to achieve this ambition – raising the stakes for all countries to do more within the next few years.

For the countries covered by this assessment, investing in blue carbon ecosystems, such as seagrass beds and mangrove forests, and transitioning to low-carbon energy sources, will provide many benefits locally — to coral reefs, but even more so to coastal communities.

Coral reef fisheries need to be brought within sustainable limits, by empowering communities and small-scale fishers to co-manage their fisheries, together with government agencies. We also need to establish sufficient no-take areas to allow fishery replenishment.

Compounding stressors on coral reefs also need to be reduced. This can be done by reforming land-based development adjacent to and upstream of coral reefs, and transforming critical sectors such as tourism, to bring them within environmentally sustainable limits.

Coral reefs are iconic. They are the most biodiverse marine ecosystem, sustain hundreds of millions of people around the world, and are of superlative beauty. In the Western Indian Ocean region, reefs have been valued at US$ 18.1 billion, are the primary asset supporting coastal tourism in all countries, and support over a quarter of a million small-scale fishers. In a region with a rapidly growing population and urgent development needs for a good quality of life for all, coral reefs are a critical asset we cannot afford to lose.

From now till 2030 will be a critical decade — to avoid dangerous climate change, to halt biodiversity loss, and to meet the Sustainable Development Goals agreed by almost all countries globally. None of these can be reached alone, and the current state of our coral reefs serves as a stark warning of the need to act on all of them together. And now.

We cannot overstate how close our coral reefs are to collapse. If we don’t make the right decisions in the next 10 years, coral reefs of the Western Indian Ocean will become irreversibly damaged.

David Obura, PhD is the lead author of the study “Vulnerability to collapse of coral reef ecosystems in the Western Indian Ocean” and founding director of CORDIO East Africa, a non-profit that advances marine research and conservation in Mombasa, Kenya. He is also Chair of the Coral Specialist Group at the IUCN, the world’s leading global conservation organization.

Melita Samoilys, PhD is co-Director of CORDIO East Africa and a co-author of the study. She specializes in reef ecology, fisheries management, and community-based approaches to conservation. She is a member of three IUCN Fish Species Specialist Groups.

Related listening from Mongabay’s podcast: What can seashells tell us about the health of the oceans, and how is the Philippines protecting its massive marine biodiversity? Listen here: