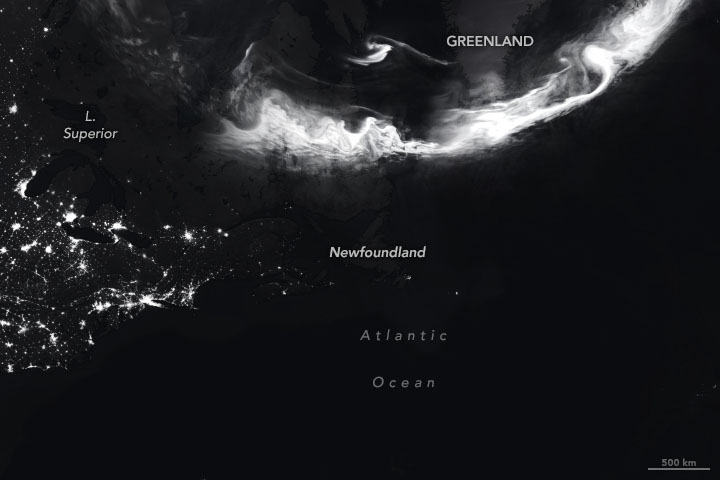 Solar Cycle 25 is underway, and that means more frequent opportunities to see auroras—more commonly known as the northern lights and southern lights. One of the best opportunities in recent years occurred on October 11-12, 2021.

In the early morning hours of October 12, 2021, the Visible Infrared Imaging Radiometer Suite (VIIRS) on the NOAA-NASA Suomi NPP satellite acquired images of the aurora borealis, or northern lights, around the Northern Hemisphere. The scene above is a mosaic of several satellite passes showing auroras over eastern North America, the North Atlantic, and Greenland. (Click on the downloadable image to see a wider view stretching to Alaska.) The nighttime satellite image was acquired with VIIRS “day-night band,” which detects light in a range of wavelengths from green to near-infrared and uses filtering techniques to observe signals such as airglow, auroras, city lights, and reflected moonlight.

That same night, astronaut Shane Kimbrough photographed the aurora (image below) from his perch on the International Space Station. The night brought the first sustained, widespread glance at the northern lights for mid-latitude viewers in several years. Many photographers and aurora chasers captured photos that night, some of which were shared with the Aurorasaurus citizen science project. 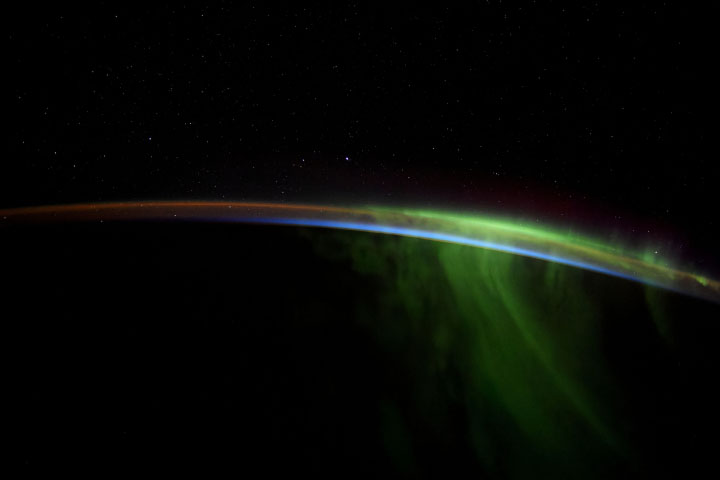 Solar cycles track the activity level of the Sun, our nearest star. A cycle is traditionally measured by the rise and fall in the number of sunspots, but it also coincides with increases in solar flares, coronal mass ejections (CMEs), radio emissions, and other forms of space weather. These bursts of magnetized plasma and energetic waves from the Sun’s atmosphere energize the gases and particles in Earth’s magnetosphere and send them plunging down in colorful light displays in the upper atmosphere. Scientists have forecasted the next peak of solar activity (solar maximum) will be reached in mid-2025.

According to the NOAA Space Weather Prediction Center, the Sun erupted with a solar flare and CME on October 9, 2021, and the storm arrived at Earth late on October 11. Geomagnetic storm activity reached G2 on a scale from G1 to G5. It was likely the first head-on CME impact of the new solar cycle. NASA’s Solar Terrestrial Relations Observatory (STEREO-A) and the Solar Dynamics Observatory captured images of the flare and CME.

You can participate in aurora citizen science through Aurorasaurus. The project team tracks auroras around the world via reports to its website and on Twitter, then generates a real-time global map of those reports. Citizen scientists log in and verify the tweets and reports, and each verified sighting serves as a valuable data point for scientists to analyze and incorporate into space weather models. The Aurorasaurus team, in collaboration with citizen scientists and the scientific community, published the first scientific study of Strong Thermal Emission Velocity Enhancement (STEVE), an aurora-like phenomenon that appears closer to the equator and flows from east to west. The project is a public-private partnership with the New Mexico Consortium supported by the National Science Foundation and NASA.