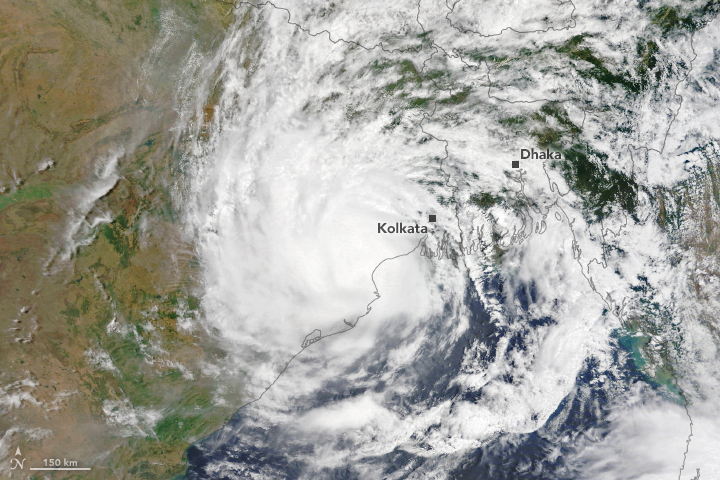 Just 9 days after a powerful tropical cyclone hit India along the Arabian Sea coast, a storm has struck the country’s northeast from the Bay of Bengal. According to the India Meteorological Department, Cyclone Yaas slammed into the north Odisha coast near Balasore at 10:30 local time (05:30 Universal Time) on May 26, 2021, bearing sustained winds of 120 kilometers (75 miles) per hour, the equivalent of a category 1 hurricane. The storm hit close enough to Bangladesh to have major impacts there as well.

The Moderate Resolution Imaging Spectroradiometer (MODIS) on NASA’s Terra satellite acquired this natural-color image of the storm after it made landfall. As its storm surge inundated low-lying coastal areas, Yaas pelted the region with heavy rains. It moved north-northwest at a speed of about 10 kilometers per hour and slowly weakened.

The storm coincided with a perigean spring tide, an especially high tide caused by the Moon and Sun being slightly closer to Earth than usual. According to news reports, Yaas has inundated hundreds of villages in Bangladesh and swamped tens of thousands of mud houses and temporary shelters in West Bengal.